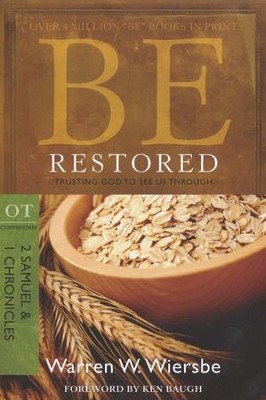 ▼▲
2 Samuel begins with the death of Saul, Israel's first king, and ends with the death of David, Israel's greatest king. Saul tore things apart, but God used David to start putting things back together again. The book tells how God enabled David to unite the 12 tribes into one nation, defeat their enemies, expand their borders, and prepare the way for Solomon to ascend the throne. Parallel passages in 1 Chronicles supplement the "prophetic" account in 2 Samuel and give us the priestly point of view.

After David sinned with Bathsheba and tried to cover it up, his own family was torn apart and the nation plunged into a second civil war. But the Lord was with His servant and ready to forgive when the king repented and confessed. We learn from David that God uses imperfect people to accomplish His purposes, and no personal or national situation is beyond the Lord's ability to put things right. God is looking for men and women who will yield to His power and help restore broken lives, homes, churches, cities, and nations.

13 Chapters with timelines, an outline, and commentary, plus questions for personal reflection or group discussion.

Our God longs to restore that which is broken. Fractured relationships. Hurting families. Divided churches. No situation is beyond His grace. And most miraculous of all? He chooses to use broken people to heal broken situations. The book of 2 Samuel is a remarkable testimony to this truth. Here we find King David, a godly man reeling from tragic choices, struggling to unify a nation torn apart by civil war. This study looks at God’s passion for restoring lives, relationships and His church, by working through those who are simply available to Him.

Part of Dr. Warren W. Wiersbe’s best-selling "BE" commentary series, Be Restored has now been updated with study questions and a new introduction by Ken Baugh. A respected pastor and Bible teacher, Dr. Wiersbe shares that no broken person is beyond God’s power. You’ll discover that—no matter your story, no matter your situation—God can use you to bring about restoration in this world.

▼▲
I'm the author/artist and I want to review Be Restored (2 Samuel & 1 Chronicles).
Back
Back