Skip to main content
Be My Neighbor
By: Maya Ajmera, John D. Ivanko
Stock No: WW916853 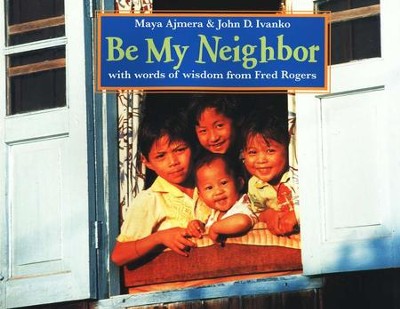 ▼▲
Around the world, children live in community with others, sharing homes, resources, and experiences with their neighbors. This book celebrates what it means to be a neighbor the whole world over -- from Vietnam to the United States, Austria to Kenya and everywhere in between.

▼▲
Complete with a foreword and words of wisdom by Fred Rogers, readers will celebrate diversity as they travel around the world to learn what it means to be a good neighbor in communities across the globe. Around the world, children live in communities with others, sharing homes, resources, and experiences with their neighbors. Through vibrant photographs and simple text, readers will see neighborhoods from Vietnam to the United States, Austria to Kenya and everywhere in between and learn what it means to be part of a community. This celebration of culture, tradition, and friendship will have readers asking "won’t you be my neighbor?"

John D. Ivanko is an award-winning photographer and author, writer, national speaker, and conservationist.He is the co-author (with Maya Ajmera) or photo contributor to nine Global Fund for Children books. With Maya Ajmera, he's co-authored the award-winning To Be a Kid, Be My Neighbor, To Be an Artist, Back to School, Animal Friends, and Come Out and Play.

▼▲
A visually enticing tribute to diversity and the number of bonds that unite us in a common humanity. This works like a primer in cultural geography, introducing young readers to locales as disparate as Togo and Brunei. Ajmera and Ivanko have gathered crisp, evocative photographs, with up to a dozen scattered across the two-page spreads, illustrating architecture and food, rituals and ceremonies, play and work. A note of the locale accompanies each of the photographs and a handy, colorfully appealing map helps readers situate where on the globe these shots were taken. The text--though well-intended and emphasizing both the cradling pleasures and the distinctiveness of each community--couldn't be flatter if it were Kansas: "Schools are important because they help you learn and become more helpful to your community." But what this lacks in bounce, it makes up for in an unequivocal broadside against xenophobia.
—Kirkus Reviews

In an opening-page photograph, the late Fred Rogers sits in front of the Neighborhood of Make-Believe castle surrounded by an ethnically diverse group of children. His introductory "Words of Wisdom"--vintage Mister Rogers--talk about how a neighbor can live close by or far away, but "as different as we are from one another...we are much more the same than we are different." The following pages expand on this concept of a global neighborhood. Each double-page spread introduces a particular aspect of neighborhoods ("Your neighborhood is a special place"; "Neighborhoods have schools") while accompanying photographs feature children from different countries (including Japan, Mongolia, the Philippines, Mali, Turkey, the Bahamas, and the United States) to illustrate the ideas in the brief text. The engaging color photographs and the simple words make this an excellent resource for multicultural community units.
—The Horn Book

This beautifully crafted book explores the concept of community, using well-chosen words from the late Mr. Rogers as a starting point: "Neighbors are people who care about and help each other. Sometimes they live in the same real neighborhood. But they can also be 'neighbors' even if they live far away." Illustrated with bright beautiful full-color photos of children around the world, the gorgeous spreads are organized by themes, including homes, schools, places of worship, recreational areas, transportation, celebrations, and sharing responsibilities to improve your neighborhood and the lives of those who live there. With photos depicting everything from an open-air Mexican market to a Guatemalan village to a Hanukkah celebration in the U.S., this book celebrates diversity, all the while emphasizing our overarching similarities. An appended map highlights the countries where the photos were taken. The brief text and stunning illustrations make this an ideal book for sharing. Mr. Rogers would be proud.
—School Library Journal

Beginning with introductory "Words of Wisdom from Fred Rogers," this horizontally formatted book explores the concept of neighborhood through a duel text and dozens of excellent photographs. The large-print text, suitable for young preschool children, uses short phrases to reinforce the idea of what a neighborhood is. For instance, the sentence "Neighborhoods also have schools" appears on one spread, while the next three spreads note that there are also "places to worship," "places to play," "and places to buy the things you need." A paragraph of text enlarges on the spread's theme, illustrated by several colorful photos, identified simply by the name of one of the 37 countries represented. Elementary and preschool teachers will find this a rich source of pictures showing the functions of a community and the variety of neighborhoods throughout the world.
—Booklist

▼▲
I'm the author/artist and I want to review Be My Neighbor.
Back
Back