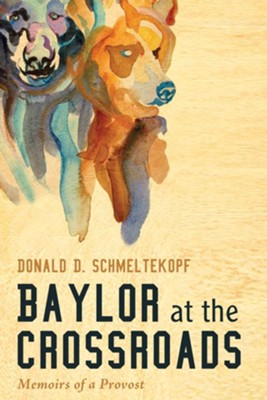 Baylor at the Crossroads: Memoirs of a Provost - eBook

▼▲
This is a book about the enormous changes that took place at Baylor University from 1991 to 2003, as seen through the perceptive eyes of its provost at the time, Donald D. Schmeltekopf. On the front end was the charter revision, a change that permanently restructured the legal governance of the university. On the back end was Baylor 2012, a grand vision for the university issued by the Board of Regents on September 21, 2001. There were several critical crossroads along the way to what has now been created at Baylor, a Christian research university, one of a kind among church-related universities in the Protestant orbit. These memoirs tell the story of this transformation from the perspective of one who was leading at the crossroads.

▼▲
Donald Schmeltekopf is provost emeritus of Baylor University. He was provost of Baylor from 1991 to 2003. Prior to coming to Baylor, he served five years as vice president and provost at Mars Hill College, and two years as a program officer at the National Endowment for the Humanities. He is the coeditor of five books, including The Baylor Project: Taking Christian Higher Education to the Next Level (2007).

▼▲
I'm the author/artist and I want to review Baylor at the Crossroads: Memoirs of a Provost - eBook.
Back
Back