Skip to main content
SPRING CYBER EVENT STARTS NOW: And it's a really BIG deal! Up to 88% off through 5/24>
The Baxters Take One - unabridged audio book on CD
By: Karen Kingsbury
Stock No: WW597989 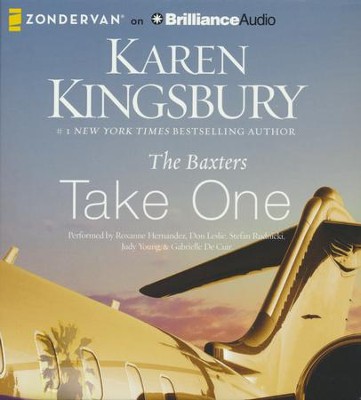 The Baxters Take One - unabridged audio book on CD

▼▲
Filmmakers Chase Ryan and Keith Ellison left the mission field of Indonesia for the mission field of Hollywood with a dream bigger than both of them. Now they have done the impossible: raised enough money to produce a feature film with a message that could change the world.

But as Chase and Keith begin shooting, their well-laid plans begin to unravel. With millions of dollars on the line, they make a desperate attempt to keep the film from falling apart - even as a temperamental actress, a botched production schedule, and their own insecurities leave little room for the creative and spiritual passion that once motivated them. Was God really behind this movie after all? A chance meeting and friendship with John Baxter could bring the encouragement they need to stay on mission and produce a movie that will actually change people's lives. In the midst of the questions and the cameras, is it possible to keep things above the line and make movie unlike anything before - or is the risk too great for everyone?

Can they change the world—before the world changes them?

Filmmakers Chase Ryan and Keith Ellison have left the mission fields of Indonesia for the mission field of Hollywood with a dream bigger than both of them. Now they have done the impossible—raised enough money to independently produce a feature film with a message they hope will change the world.They have attached top talent to the picture, and are set to begin filming in Bloomington, Indiana, where Keith’s daughter is a freshman, when everything begins to unravel.

With millions of dollars of investors’ money on the line, Chase and Keith make a desperate attempt to keep the film from falling apart. Along the way, trouble threatens key relationships for the producers and makes them question everything they’re trying to do. Soon the realization dawns on them that they are in over their heads, a couple of Davids in a world of Hollywood Goliaths. Is it possible to keep things above the line, to beat the odds and make a movie unlike anything done before, or will they lose everything in the process?

▼▲
I'm the author/artist and I want to review The Baxters Take One - unabridged audio book on CD.
Back
Back