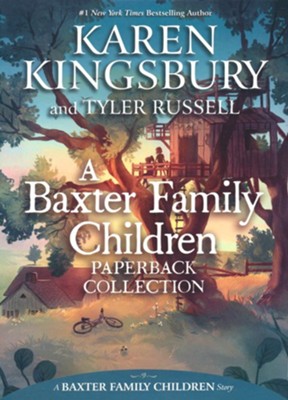 ▼▲
Brooke, Kari, Ashley, Erin, and Luke grow up learning important lessons in the first three books in the Baxter Family Children series—now available together in a collectible paperback boxed set!

Brooke, Kari, and Ashley work hard to make their parents proud of them. Each girl has her own talents. And they are always there for each other. But when the news comes that Dr. Baxter is moving the family from Ann Arbor to Bloomington, Indiana, no one is happy. Saying goodbye is hard, but the family still has what’s most important—their faith and their love for each other. Over the years, that will get them through the good and hard days together.

Much-loved storyteller Karen Kingsbury’s Baxter Family books have captured the hearts of millions who have come to think of the Baxter family as their own. See how the Baxter siblings grew up in these funny and poignant books from the #1 New York Times bestselling team Karen Kingsbury and Tyler Russell.

Tyler Russell has been telling stories his whole life. In elementary school, he won a national award for a children’s book he wrote, and he has been writing ever since. In 2015, he graduated with a BFA from Lipscomb University. Soon after, he sold his first screenplay, Karen Kingsbury’s Maggie’s Christmas Miracle, which premiered in December of 2017 on Hallmark. Along with screenplays and novels, Tyler is a songwriter, singer, actor, and creative who lives in Nashville, Tennessee, where he enjoys serving his church, adventuring around the city, and spending time with his family.

Olivia Chin Mueller grew up in Chester, Connecticut, and now lives in Los Angeles, California. She attended the Rhode Island School of Design and graduated with a BFA in 2014. Besides illustrating, Olivia loves playing with her cats, raising silk moths, and also enjoys sewing and felting plush animals of her own.

▼▲
I'm the author/artist and I want to review Baxter Family Children Paperback Collection.
Back
Back