We are OPEN and SHIPPING - click here for shipping estimates
PRE-SUMMER CYBER SALE EXTENDED thru 6/1 ~ Over 2,500 items up to 90% off
Battles Of The Heart: Boot Camp For Military Moms - eBook
By: Tracie Ciambotti 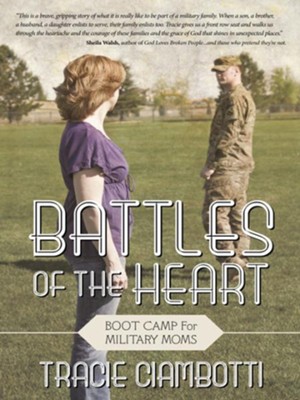 Battles Of The Heart: Boot Camp For Military Moms - eBook

What happens to our natural instinct, as a mother, to protect our child when he or she is ordered to one of the most dangerous places in the world? What gets us through the day? How do we survive?

Tracie's son, Josh, enlisted in the Army two days after he graduated from high school in 2005. Five months later he was on his way to Baghdad and the reality of war began to sink into the depths of Tracie's heart. She had no idea when or if she would ever see her son again. As the weeks passed, fear became the master of her days. Josh had received the best training in the world for his new job as a combat soldier with the United States Armed Forces, but Tracie had none for her role as the mother of a service member. While her son was fighting a war in Iraq, she was marching unaware and unprepared into her own battle at home.

▼▲
I'm the author/artist and I want to review Battles Of The Heart: Boot Camp For Military Moms - eBook.
Back
×
Back
×