Skip to main content
SPRING CYBER EVENT STARTS NOW: And it's a really BIG deal! Up to 88% off through 5/24>
Battle of Wits: The Complete Story of Codebreaking in World War II
By: Stephen Budiansky
Stock No: WW17349 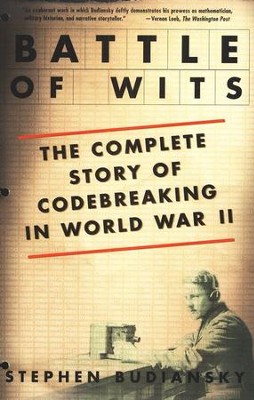 Battle of Wits: The Complete Story of Codebreaking in World War II

▼▲
While we think of D-Day as the event that won WWII, it would have never even been possible without the code breakers from Bletchly Park, England. Presenting the history of code breaking during World War II, Battle of Wits provides extensive information on the Enigma Machine, explanations of how the Japanese codes were broken, and how American codebreaking machines helped to crack the Axis codes. Black and white photograph plates are included. 436 indexed pages, softcover.

▼▲
A million pages of new World War II codebreaking records have been released by the U.S. Army and Navy and the British government over the last five years. Now, Battle of Wits presents the history of the war that these documents reveal. From the battle of Midway until the last German code was broken in January 1945, this is an astonishing epic of a war that was won not simply by brute strength but also by reading the enemy's intentions.
The revelations of Stephen Budiansky's dramatic history include how Britain tried to manipulate the American codebreakers and monopolize German Enigma code communications; the first detailed published explanations of how the Japanese codes were broken; and how the American codebreaking machines worked to crack the Japanese, the German, and even the Russian diplomatic codes. The compelling narrative shows the crucial effect codebreaking had on the battlefields by explaining the urgency of stopping the wolf pack U-boat attacks in the North Atlantic, the importance of halting Rommel's tanks in North Africa, and the necessity of ensuring that the Germans believed the Allies' audacious deception and cover plans for D-Day. Unveiled for the first time, the complete story of codebreaking in World War II has now been told.

▼▲
Stephen Budiansky received a master's degree in applied mathematics from Harvard University and worked on classified military studies as a Congressional Fellow. He is a correspondent for The Atlantic, and his articles have also appeared in The Economist, The New York Times, and U.S. News &amp; World Report. He lives in Leesburg, Virginia.

▼▲
Vernon Loeb The Washington Post An exuberant work in which Budiansky deftly demonstrates his prowess as mathematician, military historian, and narrative storyteller.
Simon Singh Nature The story of cryptography in the Second World War is one of the great scientific tales of the twentieth century. Budiansky has succeeded in telling it with enthusiasm and insight, delivering a book with style and substance.

▼▲
I'm the author/artist and I want to review Battle of Wits: The Complete Story of Codebreaking in World War II.
Back
Back