Skip to main content
Battle of Lake Erie and Its Aftermath: A Reassessment - eBook
By: David Curtis Skaggs
Stock No: WW44912EB 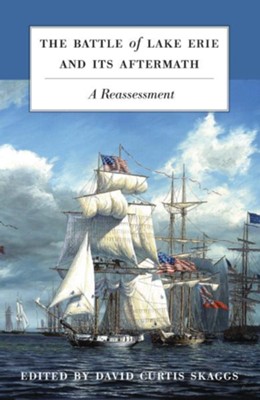 Battle of Lake Erie and Its Aftermath: A Reassessment - eBook

Few naval battles in American history have left a more enduring impression on America’s national consciousness than the Battle of Lake Erie, September 10, 1813. Master Commandant Oliver Hazard Perry’s battle flag emblazoned with the message “Don’t Give Up the Ship,” now enshrined at the U.S. Naval Academy, has become a naval maxim. His succinct after-action report—“We have met the enemy and they are ours”—constitutes one of the more memorable battle summaries in American history.

This splendid collection celebrates the bicentennial of the American victory with a review of the battle and its consequences. The volume is divided into three sections.  The first deals with “Military Operations” in the upper Great Lakes, 1812–14, and provides an overview of the War of 1812 in the Old Northwest and western Upper Canada. The second, “Consequences,” assesses the long-term impact of this campaign upon the Native Americans and Euro-Americans who lived in the region and three individuals whose lives were changed by the American recovery of the upper lakes in 1813. The final section, “Memory,” examines two ways the United States keeps the legacy of its first squadron-to-squadron victory alive by maintaining the fragile battle flag that flew on Perry’s flagships and by sailing the replica of US Brig Niagara on the Great Lakes and the East Coast.

Collectively these essays allow the general reader, the military history enthusiast, and the professional historian to take a fresh look at this significant naval engagement and its impact on subsequent historical events.

▼▲
David Curtis Skaggs is a well-known authority on the War of 1812. He is professor emeritus of history at Bowling Green State University in Ohio. A retired colonel in the Army Reserves, Skaggs has written and edited numerous books including A Signal Victory: The Lake Erie Campaign, 1812–1813 and coedited with William Jeffrey Welsh War on the Great Lakes: Essays Commemorating the 175th Anniversary of the Battle of Lake Erie (The Kent State University Press, 1991).

▼▲
I'm the author/artist and I want to review Battle of Lake Erie and Its Aftermath: A Reassessment - eBook.
Back
Back