Skip to main content
SPRING CYBER EVENT STARTS NOW: And it's a really BIG deal! Up to 88% off through 5/24>
His Battle: God's Plan for Victory - eBook
By: Jacob A. Shepherd, Sheri Rose Shepherd
Stock No: WW32865EB 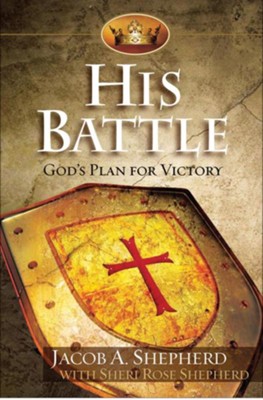 ▼▲
In His Battle, Jacob Shepherd teams up with his mother, Sheri Rose Shepherd, best-selling author of the His Princess series, to help men destroy the lies they are told by the world. Featuring letters from God based on 2 Timothy 4:7 and empowering prayer responses, this guide will help men renew their strength, restore their God-given fight, and live in God's truth! Padded hardcover.

▼▲
All men have fight inside them. It's how they were made. And yet society tries to block that fight and tell men how much they've failed. What does a man do with that tension? And what does it do to his soul?
Now Jacob A. Shepherd has teamed up with his mother, Sheri Rose Shepherd, on a book that speaks directly to men's souls. Based on 2 Timothy 4:7, His Battle offers letters from God written specifically to men, followed by prayer responses, all accompanied by plenty of Scripture. This book will destroy the lies men are told about themselves. At the same time, His Battle will speak to men in the still, calming voice of their loving Creator to renew their strength, restore their God-given fight, and help them walk and live in power and truth again.
Packaged handsomely, this is the book women want to buy for their men. His Battle will help men heal from the inside and grow strong in the Lord.

▼▲
Jacob A. Shepherd is the founder of Life Inc. Ministries and an award-winning communicator. He is a frequent speaker at Nextgenhusband conferences for mothers of sons as well as in youth events throughout the country. Recently he lived and worked for a year at the Los Angeles Dream Center in the inner city of Los Angeles helping to rebuild broken families. This is Jake's first book.

Sheri Rose Shepherd is the founder of His Princess Ministries and the author of several books, including the bestselling His Princess: Love Letters from Your King. She was the popular subject of a prime-time Billy Graham special and will be touring with Extraordinary Women in 2010.

▼▲
I'm the author/artist and I want to review His Battle: God's Plan for Victory - eBook.
Back
Back