Skip to main content
SPRING CYBER EVENT STARTS NOW: And it's a really BIG deal! Up to 88% off through 5/24>
The Battle for God: A History of Fundamentalism - eBook
By: Karen Armstrong
Stock No: WW19287EB 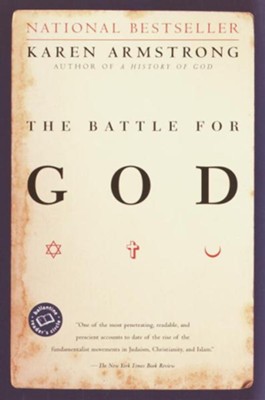 The Battle for God: A History of Fundamentalism - eBook

▼▲
In the late twentieth century, fundamentalism has emerged as one of the most powerful forces at work in the world, contesting the dominance of modern secular values and threatening peace and harmony around the globe. Yet it remains incomprehensible to a large number of people. In The Battle for God, Karen Armstrong brilliantly and sympathetically shows us how and why fundamentalist groups came into existence and what they yearn to accomplish.

We see the West in the sixteenth century beginning to create an entirely new kind of civilization, which brought in its wake change in every aspect of life -- often painful and violent, even if liberating. Armstrong argues that one of the things that changed most was religion. People could no longer think about or experience the divine in the same way; they had to develop new forms of faith to fit their new circumstances.

Armstrong characterizes fundamentalism as one of these new ways of being religious that have emerged in every major faith tradition. Focusing on Protestant fundamentalism in the United States, Jewish fundamentalism in Israel, and Muslim fundamentalism in Egypt and Iran, she examines the ways in which these movements, while not monolithic, have each sprung from a dread of modernity -- often in response to assault (sometimes unwitting, sometimes intentional) by the mainstream society.

Armstrong sees fundamentalist groups as complex, innovative, and modern -- rather than as throwbacks to the past -- but contends that they have failed in religious terms. Maintaining that fundamentalism often exists in symbiotic relationship with an aggressive modernity, each impelling the other on to greater excess, she suggests compassion as a way to defuse what is now an intensifying conflict.


BONUS: This edition contains an excerpt from Karen Armstrong's Twelve Steps to a Compassionate Life.

▼▲
Karen Armstrong is one of the foremost commentators on religious affairs in both Britain and the United States. She spent seven years as a Roman Catholic nun, took a degree at Oxford University, teaches at Leo Baeck College for the Study of Judaism, and received the 1999 Muslim Public Affairs Council Media Award. Her previous books include the best-selling A History of God: The  4000-Year Quest of Judaism, Christianity, and Islam; Jerusalem: One City, Three Faiths; and In the Beginning: A New Interpretation of Genesis.

▼▲
"One of the most penetrating, readable, and prescient accounts to date of the rise of the fundamentalist movements in Judaism, Christianity, and Islam."
--The New York Times Book Review

"EXCELLENT . . . HIGHLY INTELLIGENT AND HIGHLY READABLE . . . This is a book that will prove indispensable . . . for anyone who seeks insight into how these powerful movements affect global politics and society today and into the future."
--The Baltimore Sun

"ARMSTRONG SUCCEEDS BRILLIANTLY . . . With her astonishing depth of knowledge and readily accessible writing style, [she] makes an ideal guide in traversing a subject that is by its very nature complex, sensitive and frequently ambiguous."
--The San Francisco Examiner and Chronicle

"A USEFUL AND REWARDING BOOK."
--The Boston Globe

▼▲
I'm the author/artist and I want to review The Battle for God: A History of Fundamentalism - eBook.
Back
Back