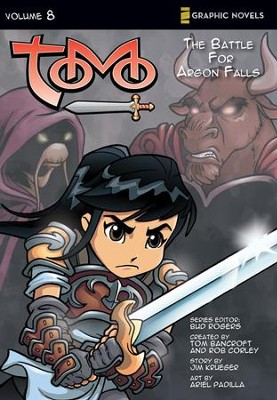 ▼▲
Hana is like any other 13-year-old---except she battles hostile warriors from another dimension! In this final volume, the war seems lost. Will the prayers of Hana's friends sustain her as she dons her spiritual armor to fight the evil that threatens them all? A powerful story in manga format of faith, courage, and transformation.

ONE FINAL BATTLE BRINGS GLORY ... OR DESTRUCTION The war appears lost and Argon Falls is doomed, but Hana's friends still believe in the power of prayer. With their support, her faith is restored and Hana bravely rejoins the fight. But when the forces of good and evil face off once more, the final battle will determine the fate of Argon Falls … forever.

▼▲
Bud Rogers is a cartoonist and editor and has been very active in the Christian comics community for the past fifteen years. Bud uses his organizational and management skills to assist artists and writers in realizing their creative visions.
Rob Corley is a veteran animator with Disney, San Marco Films, and Curious Pictures. Rob is also the cofounder Funnypages Productions, an animation development and illustration company, and Funnypages Press, a comic book publisher.
Tom Bancroft is a veteran Disney and Big Idea animator. While with Big Idea, he designed and directed the LarryBoy series of videos. Tom still keeps his hands in animation, but he also enjoys creating comics.
Ariel has been drawing comics for the past fifteen years in the Philippines. His most recent work has been on the relaunch of the eighties comic series The Maze Agency for IDW Publishing.

Funnypages Productions is a studio founded by veteran Disney and Big Idea animators Tom Bancroft and Rob Corley. Their goal is to capture the fun and excitement of animation in books for readers of all ages.

▼▲
I'm the author/artist and I want to review Battle for Argon Falls, Volume 8, Z Graphic Novels / Tomo.
Back
Back