Skip to main content
The Battle of Arnhem: The Deadliest Airborne Operation of World War II
By: Antony Beevor
Stock No: WW3128830 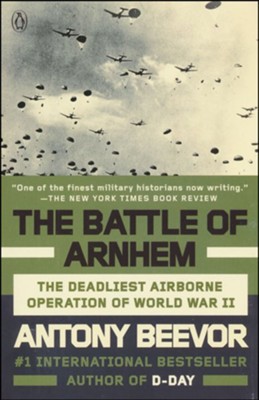 The Battle of Arnhem: The Deadliest Airborne Operation of World War II

▼▲
The prizewinning historian and internationally bestselling author of D-Day reconstructs the devastating airborne battle of Arnhem in this gripping new account.

On September 17, 1944, General Kurt Student, the founder of Nazi Germany's parachute forces, heard the groaning roar of airplane engines. He went out onto his balcony above the flat landscape of southern Holland to watch the air armada of Dakotas and gliders, carrying the legendary American 101st and 82nd Airborne Divisions and the British 1st Airborne Division.

Operation Market Garden, the plan to end the war by capturing the bridges leading to the Lower Rhine and beyond, was a bold concept, but could it have ever worked? The cost of failure was horrendous, above all for the Dutch who risked everything to help. German reprisals were pitiless and cruel, and lasted until the end of the war.

Antony Beevor, using often overlooked sources from Dutch, American, British, Polish, and German archives, has reconstructed the terrible reality of the fighting, which General Student called "The Last German Victory." Yet The Battle of Arnhem, written with Beevor's inimitable style and gripping narrative, is about much more than a single dramatic battle--it looks into the very heart of war.

▼▲
Antony Beevor was educated at Winchester and Sandhurst. A regular officer in the 11th Hussars, he served in Germany and England. He has published several novels, and his works of nonfiction include The Spanish Civil War; Crete: The Battle and the Resistance, which won the 1993 Runciman Award; Stalingrad: The Fateful Siege: 1942—1943; and Berlin: The Downfall, 1945. With his wife, Artemis Cooper, he wrote Paris: After the Liberation: 1944—1949. His book Stalingrad was awarded the Samuel Johnson Prize for Non-Fiction, the Wolfson History Prize, and the Hawthornden Prize in 1999.

▼▲
"Beevor conveys a clear sense of what was happening in each fight and the knock-on consequences for the others. What’s more, the compressed time scale and limited strategic scope of Market Garden ideally suit the author’s testimony-rich approach . . . Mr. Beevor is a highly accomplished architect of what the American literary scholar Samuel Hynes calls 'battlefield gothic': the nightmarish horrors and absurdities of combat which themselves become a badge of authenticity for war stories . . .  no one could be better placed to explore these topics."—The Wall Street Journal

"[The Battle of Arnhem] is destined to be a World War II military history classic . . . Excellent maps make the action easy to follow, and the author’s clear, quick prose makes for fascinating, informative reading. . . Beevor’s superb latest offering, in keeping with his established record of excellence, is a must-read for the general military history enthusiast and the WWII history expert."—Publishers Weekly (starred)

"The Battle of Arnhem brings a wealth of new detail to a major World War II disaster . . . Beevor brings to the familiar story a vast amount of research in German, British, American, Polish, and Dutch archives. As usual, his narrative bristles with specifics, including countless observations gleaned from eyewitnesses to every stage of Market Garden. Devoted readers of military history will enjoy the wealth of details."—Christian Science Monitor

"In this new volume, Sir Antony Beevor takes a fresh look at this battle first popularized by Cornelius Ryan’s landmark A Bridge Too Far . . . Sir Antony describes the unfolding of the battle in marvelous detail with numerous recollections from both Allied and German participants. One aspect of the battle he covers much better than older narratives is the heavy fighting beyond the Arnhem bridge, the usual focus of Market-Garden histories."—New York Journal of Books

"In the meticulous narrative style he first employed in Stalingrad, [Beevor] recreates the operation from the dropping of the first troops on September 17th to the evacuation of the remnants of the British 1st Airborne Division eight days later. . . Sir Antony’s unearthing of neglected sources from all the countries involved—British, American, Polish, Dutch and German—brings to life every aspect of the battle."—The Economist

"Beevor tells a story that is more human and complex than what he calls ’the great myth of heroic failure,’ a tale of vanity, hubris, occasional incompetence, human frailty and remarkable grit."—The Times (UK)

"Beevor describes the battle and its aftermath with his customary deep understanding of the human factor – both of the soldiers who risked everything and of the plight of the Dutch civilians."—The Spectator (UK)

▼▲
I'm the author/artist and I want to review The Battle of Arnhem: The Deadliest Airborne Operation of World War II.
Back
Back