Skip to main content
My Battle Against Hitler: Defiance in the Shadow of the Third Reich
By: Dietrich von Hildebrand
Stock No: WW347532 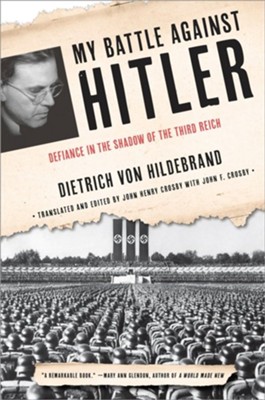 My Battle Against Hitler: Defiance in the Shadow of the Third Reich

Now with a new foreword by Sir Roger Scruton.

How does a person become Hitler’s enemy number one? Not through espionage or violence, it turns out, but by striking fearlessly at the intellectual and spiritual roots of National Socialism.

Dietrich von Hildebrand was a German Catholic thinker and teacher who devoted the full force of his intellect to breaking the deadly spell of Nazism that ensnared so many of his beloved countrymen.

His story might well have been lost to us were it not for this memoir he penned in the last decades of his life at the request of his wife, Alice von Hildebrand. In My Battle Against Hitler, covering the years from 1921 to 1938, von Hildebrand tells of the scorn and ridicule he endured for sounding the alarm when many still viewed Hitler as a positive and inevitable force. He expresses the sorrow of having to leave behind his home, friends, and family in Germany to conduct his fight against the Nazis from Austria. He recounts how he defiantly challenged Nazism in the public square, prompting the German ambassador in Vienna to describe him to Hitler as "the architect of the intellectual resistance in Austria." And in the midst of all the danger he faced, he conveys his unwavering trust in God, even during his harrowing escape from Vienna and his desperate flight across Europe, with the Nazis always just one step behind.

Dietrich von Hildebrand belongs to the very earliest anti-Nazi resistance. His public statements led the Nazis to blacklist him in 1921, long before the horrors of the Third Reich and more than 23 years before the assassination attempt on Hitler in July 1944. His battle would culminate in the countless articles he published in Vienna, a selection of which are featured in this volume.

"It is an immense privilege," writes editor John Henry Crosby, founder of the Hildebrand Project, "to present to the world the shining witness of one man who risked everything to follow his conscience and stand in defiance of tyranny."

DIETRICH VON HILDEBRAND (1889–1977), born in Florence, was the son of renowned German sculptor Adolf von Hildebrand. A leading student of the philosophers Edmund Husserl and Max Scheler, he took up the "great questions"—about truth, freedom, conscience, community, love, beauty—with a freshness that allowed him to break new ground, especially in ethics, but also in epistemology, social philosophy, and aesthetics. His conversion to Catholicism in 1914 was the decisive turning point of his life and the impetus for important religious works. His opposition to Hitler and Nazism was so outspoken that he was forced to flee Germany in 1933, and later across Europe, finally settling in New York City in 1940, where he taught at Fordham University until 1960. He was the author of dozens of books, both in German and English. He was a major forerunner of Vatican II through his seminal writings on marriage, on Christian philosophy, and on the evil of anti-Semitism.

JOHN HENRY CROSBY (b. 1978), is a translator, writer, musician, and cultural entrepreneur. He is founder and director of the Hildebrand Project, which fosters deep cultural renewal through publications, events, fellowships, and online resources that draw on the continuing vitality of Dietrich von Hildebrand’s thought and witness.

▼▲
"Dietrich von Hildebrand is already well-known and respected as one of the great Catholic philosophers of the twentieth century. However, this engaging collection of his personal writings on the topic of Hitler and Nazism allows us to appreciate his wisdom and courage even more fully. His faith in God and understanding of the human person enabled him to clearly see the threat posed by his evil ideology. This memoir reveals the strength of character that von Hildebrand bravely displaced throughout his twenty-year battle against of the greatest evils of his age. Even amid significant personal danger, he never wavered in his commitment to the truth. We remember Dietrich von Hildebrand’s intellectual contributions, but let us also recall his witness to human dignity in the face of evil." – Cardinal Timothy Dolan, Archbishop of New York

"Dietrich von Hildebrand's memoirs give us an inroad into the soul of another Germany, a Germany thoroughly different from that of Adolf Hitler and of the Nazis. In the years just after the First World War, he warned against the danger of exaggerated nationalism and pleaded for the reconciliation between European nations. Later he would defend the common Christian and Jewish roots of European civilization. His example warms the hearts of all those who love freedom and are willing to defend the values of our civilization." –Rocco Buttiglione, Italian statesman and close collaborator with St. John Paul II

"At this moment in history, no memoir could be more timely than Dietrich von Hildebrand’s account of how and why he risked everything to witness against the spreading evil of National Socialism. With much of today’s world silent as Christians face increasing persecution, many good men and women are asking themselves what they can do.  This remarkable book will challenge and inspire them." –Mary Ann Glendon, Learned Hand Professor of Law, Harvard University and Former US Ambassador to the Holy See

"There is but one man who can stand with Dietrich Bonhoeffer, both in intellectual brilliance and in bravery toward the Nazis; that man is Dietrich von Hildebrand. I am privileged to strongly recommend this important book as a superb introduction to this great hero of the faith. May it spawn a new generation of devotees and champions of his extraordinary thought and life." –Eric Metaxas, New York Times bestselling author of Bonhoeffer, Pastor, Martyr, Prophet, Spy and Miracles.

"Dietrich von Hildebrand, unlike so many European Christians of his time, was an early and vigorous critic of National Socialism; a man of brilliant intellect and articulate pen who spoke out forcefully against Nazi hatred of the Jews; a scholar who defended the Christian understanding of society and the human person at immense personal cost.  This wonderful collection of his writings acquaints us intimately with an extraordinary man of faith.  It’s mandatory reading for anyone interested in a fuller understanding of a profoundly important era." –Charles J Chaput, O.F.M. Cap., Archbishop of Philadelphia

"Dietrich von Hildebrand was brave in his public writings against the Nazis, brave in his hair-raising escape from Vienna in 1938. He was also bold and uncompromising in his convictions about responsibility, love, and liberty. This book brings the bold von Hildebrand back into our midst." –Michael Novak, author of Writing from Left to Right

"In the life of Dietrich on Hildebrand, we see how Catholic faith and sacramental life gave him insight, strength and freedom of spirit to confront the anti-Christian tides that swept through Western culture in the twentieth century. This compelling and inspiring memoir is a testimony to the integrity of a Christian who challenged the destructive force of the Third Reich, its dehumanizing political philosophy and its false vision of human life. I strongly recommend this memoir as a testimony to the transforming influence of the lay vocation at work in the world, exemplified in Dietrich von Hildebrand." -Cardinal Donald Wuerl, Archbishop of Washington, D.C.

▼▲
I'm the author/artist and I want to review My Battle Against Hitler: Defiance in the Shadow of the Third Reich.
Back