A Basket of Flowers: A Young Girl's Fight Against Injustice
By: C. Von Schmid 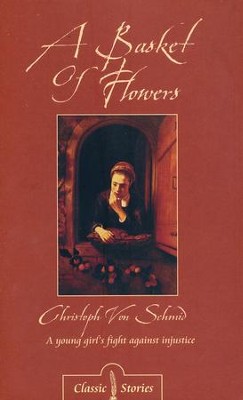 A Basket of Flowers: A Young Girl's Fight Against Injustice

▼▲
Mary lives with her father in a beautiful cottage, and here her father Jacob teaches her important lessons, like humility, purity, and forgiveness. But these lessons do not ultimately protect her from the envy and hatred of others. When an envious maid steals a ring, she passes the blame on to Mary. Mary and her father are imprisoned for the crime and exiled, but this experience has Mary learning to trust in God completely in spite of hard and difficult times.

Mary grows up sheltered and secure in a beautiful cottage with a loving father. She learns lessons about humility, purity and forgiveness under her father's watchful gaze.

However, it doesn't last. Even though she loves God and obeys him this does not protect her ultimately from the envy and hatred of others. Mary is given a generous gift of a new dress from her friend Amelia, the daughter of the local landowner. This incites envy from Juliette, Amelia's maid who had wanted the dress for herself.

When Amelia's mother's ring goes missing Juliette decides to pass the blame onto Mary. Both Mary and her father are imprisoned for the crime and eventually exiled from their home. Mary learns to trust in God completely as difficulty follows after difficulty.

Even when she doubts if she will ever clear her name she turns back to God who is a constant source of comfort to her. Who did steal the ring in the end? That is the final unexpected twist in the tale, which makes this book a really good read.

Q: Is this the same book as the Collectors 'Basket of Flowers'?

Yes, this is an abridged, softcover version of the "Rare Collector's Series" book (WW740018).

▼▲
I'm the author/artist and I want to review A Basket of Flowers: A Young Girl's Fight Against Injustice.
Back
×
Back
×