Skip to main content
Basilica: The Splendor and the Scandal: Building St. Peter's - eBook
By: R.A. Scotti
Stock No: WW47051EB 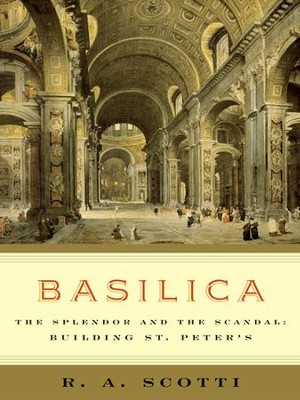 Basilica: The Splendor and the Scandal: Building St. Peter's - eBook

Here is a gem from the pen of R.A. Scotti, one of those exceptional historians with the ability to combine a palpable passion for history with a storyteller's witchery, breathing life into it and putting flesh on its bones, enthralling and drawing the reader back through time to experience the past as urgently as those who lived it. Using swift, colorful narrative, Scotti brings to life the story of the building of St. Peter's Basilica - the artists and the popes, the politics and the passions behind this audacious enterprise. Gothic cathedrals reach up to heaven, but the basilica brings heaven to earth, and the completion of the new St. Peter's was the defining event of the high Renaissance.

Out of the clash of genius and the caprice of popes it came - the most glorious monument of the Renaissance. It was the splendor - and the scandal - of the age. In 1506, the ferociously ambitious Renaissance Pope Julius II tore down the most sacred shrine in Europe - the millennium-old St. Peter's Basilica built by the Emperor Constantine over the apostle's grave - to build a better basilica. Construction of the new St. Peter's spanned two centuries, embroiled 27 popes, and consumed the genius of the greatest artists of the age - Michelangelo, Bramante, Raphael, and Bernini. As the basilica rose, modern Rome rose with it as glorious as the city of the Caesars. But the cost was unimaginable - the extravagance of the new basilica provoked the Protestant Reformation, dividing the Christian world for all time.

In the tradition of Brunelleschi's Dome, Scotti turns sacred architecture into a spellbinding human epic of enormous daring, petty jealousy, and staggering genius.

▼▲
In this dramatic journey through religious and artistic history, R. A. Scotti traces the defining event of a glorious epoch: the building of St. Peter's Basilica. Begun by the ferociously ambitious Pope Julius II in 1506, the endeavor would span two tumultuous centuries, challenge the greatest Renaissance masters—Michelangelo, Raphael, and Bramante—and enrage Martin Luther. By the time it was completed, Shakespeare had written all of his plays, the Mayflower had reached Plymouth—and Rome had risen with its astounding basilica to become Europe's holy metropolis. A dazzling portrait of human achievement and excess, Basilica is a triumph of historical writing.

▼▲
R. A. Scotti is the author of two previous works of nonfiction, including Sudden Sea: The Great Hurricane of 1938, and four novels.

▼▲
[Scotti] . . . appreciates the epic quest and querulousness and leaves us wondering how anything of any merit ever gets designed, built, consecrated and celebrated. (The Providence Journal-Bulletin)

▼▲
I'm the author/artist and I want to review Basilica: The Splendor and the Scandal: Building St. Peter's - eBook.
Back
Back