Skip to main content
CYBER MONDAY IS HERE! Shop savings up to 88%. >
Basics of Latin: A Grammar with Readings and Exercises from the Christian Tradition
By: Derek Cooper
Stock No: WW538998 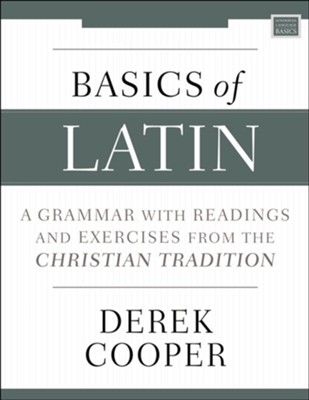 Basics of Latin: A Grammar with Readings and Exercises from the Christian Tradition

As part of the widely-used Zondervan Language Basics series of resources, Cooper's Latin grammar is a student-friendly introduction. It helps students learn by:

Basics of Latin provides an ideal first step into this important language and focuses on getting the student into texts and translation as quickly as possible.

Derek Cooper is associate dean of the faculty and associate professor of global Christianity at Reformed Episcopal Seminary. He is also managing director of Thomas Institute. A long-term foreign language instructor, he has taught Latin, Spanish, and biblical Greek. Derek is the author of many books, including Introduction to World Christian History and Exploring Church History. He has offered professional Latin translations for the Reformation Commentary on Scripture, the Martin Luther Handwriting Font Book, and is the translator of Philip Melanchthon’s Commentary on Proverbs.

▼▲
'One of the great achievements of the Venerable Bede was the shaping of tools to teach the Latin language--the tongue of Augustine and Hilary and Ambrose and the Vulgate Bible itself--using Christian resources. In this volume Bede's enterprise lives again! Derek Cooper draws us into the condensed, expressive beauty of Latin grammar and vocabulary through passages drawn from the Christian Latin tradition. His exposition is always clear, direct, and accurate. This wonderful volume is an excellent resource, and I recommend it to anyone seeking to learn the Latin language and to discover something of how central it has been in Christian life down the centuries.' -- LEWIS AYRES, professor of Catholic and historical theology, Durham University

'As advertised, this book will give you the basics of the Latin language, tailored specifically to those who wish to read Christian texts, from the Latin Bible to early modernity. While not intended to make you a Ciceronianus of the kind Jerome was accused of being in somniis, Basics of Latin provides a good foundation on which students of ecclesiastical and theological Latin can build.' -- ERIC HUTCHINSON, associate professor of classics, Hillsdale College

'Derek Cooper's Basics of Latin fills a void that the usual Latin grammars wholly ignore, for it aims at the vast bulk of the surviving corpus of Latin writings, namely, the patristic, medieval, Renaissance, and Reformation authors. Covering the wealth and variety of the texts of these writers (Augustine is not Bede is not Thomas Kempis is not Lorenzo Valla is not Calvin), Dr. Cooper treats the items that are most regular in this panoply of authors, while touching as well on some of the idiosyncrasies. It meets a great need that in my own education had to have a graduate course to fill. It looks not to supplant the study of the classics but to dive into the vast world of Latin literature that runs up into the seventeenth century and even beyond. Growing up in a time when there is no God but Cicero, and Wheelock is his prophet, this text gives to students the rest of the Latin world.' -- GARY W. JENKINS, Van Gorden Professor in History and director, St. Basil Center for Orthodox Thought and Culture, Eastern University

'Kudos to Dr. Cooper for accomplishing something never done before: an introduction to Latin grounded in the writings of the Western Fathers, Roman Catholics, and Protestants alike. Derek Cooper has created a beautifully written and conceived textbook that teaches the language in articulate, innovative, and relatable ways to those interested in its Christian expression. He takes nothing for granted, instead teaching from the ground up while avoiding intimidating technicalities. Students will find this book a pleasure to work through. In addition to the lucid grammatical explanations, numerous historical tidbits, anecdotes, and etymologies adorn the book and will sweep the students along a journey of the first sixteen hundred years of church history. This textbook will undoubtedly find its way into many Christian high schools, and rightfully so, but it is also suitable for college students and self-learners.' -- KIRK SUMMERS, professor of classics, University of Alabama

▼▲
I'm the author/artist and I want to review Basics of Latin: A Grammar with Readings and Exercises from the Christian Tradition.
Back