Skip to main content
OUR BIGGEST BARGAIN SALE EVER: Over 6,000 deals at never-seen-before prices ~ through 8/23. Shop now >
Basic Writings of John Marshall
By: John Marshall
Stock No: WW849195 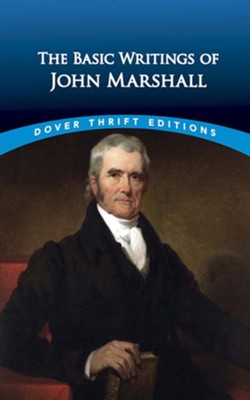 Serving as the fourth Chief Justice of the Supreme Court, John Marshall's forceful personality and many opinions and decisions established him as the most significant figure of the Court's early years. This book contains excerpts from his many landmark decisions, including Marbury v. Madison, Dartmouth College v. Woodward, McCulloch v. Maryland, and Ogden v. Saunders, as well as some of his speeches, letters to friends and other Founding Fathers, and newspaper essays on issues of the day. 224 pages, softcover.

▼▲
John Marshall’s strong personality and many Supreme Court decisions established the fourth chief justice as the most significant figure in the court’s early years. His interpretation of the Constitution profoundly influenced the federal judiciary’s authority over state courts and laws and wielded an enormous impact on American commerce.
This volume contains some of Marshall’s landmark decisions—Marbury v. Madison, Fletcher v. Peck, Dartmouth College v. Woodward, McCulloch v. Maryland, Cohens v. Virginia, and Gibbons v. Ogden—as well as his autobiographical account, his speech about ratifying the Constitution, and the preface to his biography of George Washington. Marshall’s writings are essential reading for students, lawyers, politicians, and anyone interested in understanding the Supreme Court’s powerful role in the US government and its laws.

▼▲
I'm the author/artist and I want to review Basic Writings of John Marshall.
Back