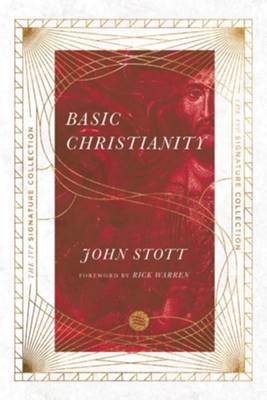 ▼▲
Who is Jesus Christ? While Jesus and his teaching continue to hold appeal, many people question the plausibility or relevance of the Christian faith. Is it reasonable to believe that Jesus was truly divine? If so, what does it mean for us? John Stott's accessible, classic book examines the historical facts on which Christianity stands. With pastoral guidance, Stott presents a biblical portrait of Christ, then considers what it looks like to become and live as a Christian. For more than sixty years, Basic Christianity has been a landmark resource that has helped millions understand the gospel. With updated language, study questions, and a new foreword by Christopher J. H. Wright, it is now available as the first volume in the IVP Signature Collection.

▼▲
John R. W. Stott (19212011) was known worldwide as a preacher, evangelist, and communicator of Scripture. For many years he served as rector of All Souls Church in London, where he carried out an effective urban pastoral ministry. A leader among evangelicals around the world, Stott was a principal framer of the landmark Lausanne Covenant. His many books, including Basic Christianity, The Cross of Christ, and Christian Mission in the Modern World, have sold millions of copies. Rick Warren is the founder of Saddleback Church and the author of New York Times bestseller The Purpose Driven Life and many other books. Regarded by Time Magazine as one of the "100 Most Influential People in the World," Warren is one of the most recognized and influential pastors in the world.

▼▲
I'm the author/artist and I want to review Basic Christianity - eBook.
Back
Back