Skip to main content
The Only Game in Town: Baseball Stars of the 1930s and 1940s Talk About the Game They Loved
By: Fay Vincent
Stock No: WW273180 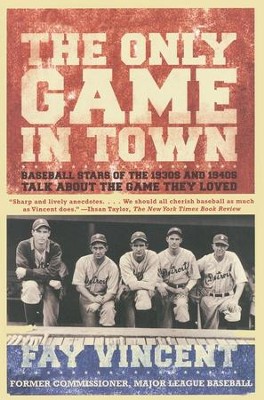 The Only Game in Town: Baseball Stars of the 1930s and 1940s Talk About the Game They Loved

▼▲
In this delightful book that every baseball fan will cherish, ten outstanding ballplayers remember the heyday of the game in the 1930s and 1940s.

▼▲
The 1930s was the era of such baseball legends as Babe Ruth, Lou Gehrig, Jimmie Foxx, Hank Greenberg, and Joe DiMaggio. In The Only Game in Town, pitcher Elden Auker recalls what it was like to face these sluggers, while Red Sox outfielder Dom DiMaggio remembers how he nearly ended his brother Joe's record hitting streak. Then, in the 1940s, baseball underwent tremendous change. First came World War II, and stars such as Bob Feller and future star Warren Spahn -- both among the ten ballplayers who discuss their playing days in this book -- left the game to serve their country. When the war ended, integration came to baseball. Jackie Robinson was soon followed by other outstanding African-American ballplayers, including Larry Doby and Monte Irvin, both of whom recall their pioneering experiences in Major League Baseball. Buck O'Neil describes scouting and coaching the next generation of African-American ballplayers and helping them make it into the major leagues. Johnny Pesky and Tommy Henrich recall great Red Sox-Yankees rivalries, but from opposite sides, while Ralph Kiner remembers his remarkable ten-year stretch as the most feared home-run hitter of his day.

The ten ballplayers who spoke with Fay Vincent for this fascinating book bring back to life baseball from a bygone time. Their stories make The Only Game in Town a must-have for all baseball fans.

▼▲
Fay Vincent is a former entertainment and business executive who served as the commissioner of baseball from 1989 to 1992.  This volume is the third in a series drawn from his Baseball Oral History Project. The previous two volumes, The Only Game in Town and We Would Have Played for Nothing, include ballplayers’ reminiscences of the 1930s and 1940s, and the 1950s and 1960s, respectively.

▼▲
"Sharp and lively anecdotes. . . . We should all cherish baseball as much as Vincent does." -- Ihsan Taylor, The New York Times Book Review

"Fay Vincent loves baseball dearly and knows it intimately, all of which shines through here." -- Jonathan Yardley, The Washington Post Book World

▼▲
I'm the author/artist and I want to review The Only Game in Town: Baseball Stars of the 1930s and 1940s Talk About the Game They Loved.
Back
Back