Skip to main content
Rob Neyer's Big Book of Baseball Blunders: A Complete Guide to the Worst Decisions and Stupidest Moments in Baseball History
By: Rob Neyer
Stock No: WW84917 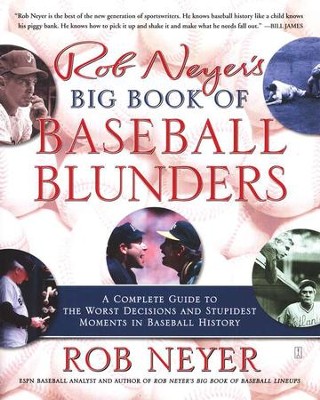 Rob Neyer's Big Book of Baseball Blunders: A Complete Guide to the Worst Decisions and Stupidest Moments in Baseball History

Baseball bloopers are fun; they're funny, even. A pitcher slips on the mound and his pitch sails over the backstop. An infielder camps under a pop-up...and the ball lands ten feet away. An outfielder tosses a souvenir to a fan...but that was just the second out, and runners are circling the bases (and laughing). Without these moments, the highlight reels wouldn't be nearly as entertaining. Baseball blunders, however, can be tragic, and they will leave diehard fans asking why...why...why?

Rob Neyer's Big Book of Baseball Blunders does its best to answer all those whys, exploring the worst decisions and stupidest moments of managers, general managers, owners, and even commissioners. As he did in his Big Book of Baseball Lineups, Rob Neyer provides readers with a fascinating examination of baseball's rich history, this time through the lens of the game's sometimes hilarious, often depressing, and always perplexing blunders.

· Which ill-fated move cost the Chicago White Sox a great hitter and the 1919 World Series?
· What was Babe Ruth thinking when he became the first (and still the only) player to end a World Series by getting caught trying to steal?
· Did playing one-armed Pete Gray in 1945 cost the Browns a pennant?
· How did winning a coin toss lead to the Dodgers losing the National League pennant on Bobby Thomson's "Shot Heard 'round the World"?
· How damaging was the Frank Robinson-for-Milt Pappas deal, really?
· Which of Red Sox manager Don Zimmer's mistakes in 1978 was the worst?
· Which Yankees trade was even worse than swapping Jay Buhner for Ken Phelps?
· What non-move cost Buck Showalter a job and gave Joe Torre the opportunity of a lifetime?
· Game 7, 2003 ALCS: Pedro winds up to throw his 123rd pitch...what were you thinking?

These are just a few of the legendary (and not-so-legendary) blunders that Neyer analyzes, always with an eye on what happened, why it happened, and how it changed the fickle course of history. And in separate chapters, Neyer also reviews some of the game's worst trades and draft picks and closely examines all the teams that fell just short of first place. Another in the series of Neyer's Big Books of baseball history, Baseball Blunders should win a place in every devoted fan's library.

▼▲
Rob Neyer has written about baseball for ESPN.com since 1996 and appears regularly on ESPNews. He has written four baseball books, including The Neyer/James Guide to Pitchers (with Bill James) and Rob Neyer's Big Book of Baseball Lineups. His website, www.robneyer.com, contains additional material related to this and his other books.

▼▲
"Rob Neyer is the best of the new generation of sportswriters. He knows baseball history like a child knows his piggy bank. He knows how to pick it up and shake it and make what he needs fall out." - Bill James

▼▲
I'm the author/artist and I want to review Rob Neyer's Big Book of Baseball Blunders: A Complete Guide to the Worst Decisions and Stupidest Moments in Baseball History.
Back
Back