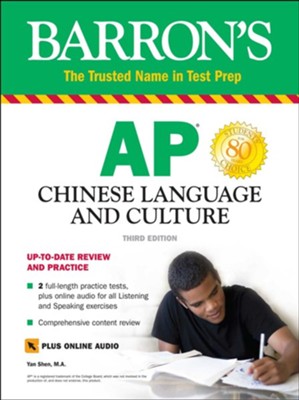 Get in-depth preparation and practice for the AP Chinese exam with Barron's AP Chinese Language and Culture. This edition reflects the AP exam's standards, presenting questions in both traditional and simplified Chinese characters. Pinyin is included in the Culture Notes section. Softcover, 624 pages.

Barron’s AP Chinese Language and Culture includes in-depth content review and practice as well as online audio. It’s the only book you’ll need to be prepared for exam day.

Written by Experienced Educators Be Confident on Exam DayOnline Audio

▼▲
​About the Authors
Yan Shen has been a lecturer in Asian Languages and Cultures at UCLA, Los Angeles since 2005. She has a Masters in Sinology and Anthropology from University Trier, Trier, Germany and a Bacherlors in Chinese Language and Literature from Capital Normal University, Beijing, China. She was born in China and has lived in Beijing for more than two decades. She taught Chinese as a second language at the International Chinese Language and Culture Center, Tsinghua University, China, during 1993 and 2004. She has been a certified Oral Proficiency Tester for the American Council on the Teaching of Foreign Languages since 2012. She has written numerous articles for journals and speaks regularly at national and global conferences. She has served as a reviewer for the Critical Language Scholarship Program (Chinese) for several years.

Joanne Shang teaches Mandarin Chinese at Rye Country Day School in New York and is professionally focused in student-centered pedagogy and technology integration in world language teaching and learning. She is a master teacher in Startalk programs and presents regularly at national and global conferences. Joanne previously taught in North Carolina and Hong Kong.

People from the community asked Mr. Barron about books that might be available to help their children study for the New York State Regents exams. After realizing there wasn't anything available, Mr. Barron's created his own study guides.

▼▲
I'm the author/artist and I want to review Barron's AP Chinese Language and Culture.
Back