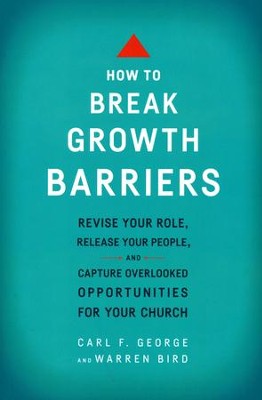 How to Break Growth Barriers, updated: Revise Your Role, Release your People, and Capture Overlooked Opportunities

Some churches grow rapidly, only to hit a ceiling. Other churches have experienced declining or static attendance--many of them for decades. Frustrated pastors and church leaders want growth methods that work, but without adding to pastoral fatigue.

Warren Bird
(PhD, Fordham University) is vice president of research for the Evangelical Council for Financial Accountability (ECFA.org). An ordained minister and former seminary professor, he is also author or coauthor of thirty-one books including Next: Pastoral Succession That Works. He and his wife, Michelle, live in a suburb of New York City.

▼▲
I'm the author/artist and I want to review How to Break Growth Barriers, updated: Revise Your Role, Release your People, and Capture Overlooked Opportunities.
Back
Back