Skip to main content
How to Break Growth Barriers: Revise Your Role, Release Your People, and Capture Overlooked Opportunities for Your Church / Revised - eBook
By: Carl F. George, Warren Bird
Stock No: WW88163EB 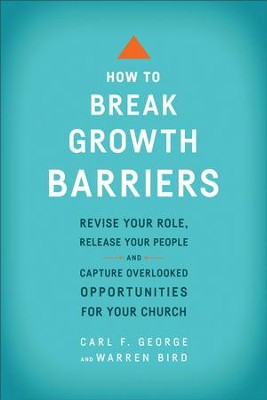 How to Break Growth Barriers: Revise Your Role, Release Your People, and Capture Overlooked Opportunities for Your Church / Revised - eBook

▼▲
Some churches grow rapidly, only to hit a ceiling. Other churches have experienced declining or static attendance--many of them for decades. Frustrated pastors and church leaders want growth methods that work, but without adding to pastoral fatigue.

Warren Bird is an ordained minister and teaches at Alliance Theological Seminary. He is also author or coauthor of twenty-eight books, including Next: Pastoral Succession That Works. He and his wife, Michelle, live in a suburb of New York City.

▼▲
I'm the author/artist and I want to review How to Break Growth Barriers: Revise Your Role, Release Your People, and Capture Overlooked Opportunities for Your Church / Revised - eBook.
Back
Back