Skip to main content
CYBER WEEK SALE! Spot great deals up to 88% off. >
Barnabas vs. Paul: To Encourage or Confront?
By: Charles Kevin Robertson
Stock No: WW882778 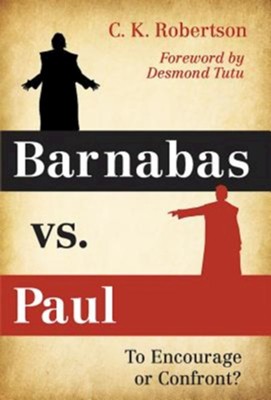 ▼▲
The Rev. Dr. C. K. Robertson is Canon to the Presiding Bishop of The Episcopal Church and Distinguished Visiting Professor at General Theological Seminary in New York City. He received his Ph.D. from Durham University and was named a Fellow of the Episcopal Church Foundation. Having served on several boards, including the Governing Board of the National Council of Churches and the Board of the Anglican Theological Review, Dr. Robertson has written and edited many books and articles, including Jesus and Paul: Global Perspectives, a festschrift in honor of his doctoral supervisor, James D. G. Dunn, and Conversations with Scripture: Acts of the Apostles. He recently was named General Editor of a new book series, Studies in Episcopal and Anglican Theology.

▼▲
I'm the author/artist and I want to review Barnabas vs. Paul: To Encourage or Confront?.
Back
Back