Skip to main content
The Barber of Seville and the Marriage of Figaro
By: Pierre Caron
Stock No: WW441336 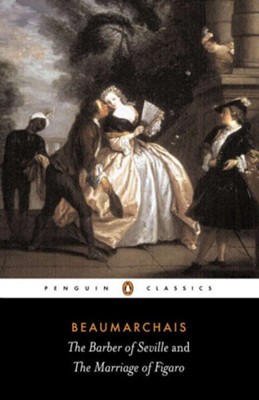 The Barber of Seville and the Marriage of Figaro

▼▲
It is said of Beaumarchais (1732-99) that he had only one character--himself--and that Figaro epitomizes all his creator's vices. This does not seem to have stood in the way of his success. If The Barber of Seville and its sequel The Marriage of Figarro, are known to us almost exclusively through the operas Rossini and Mozart, the that is our loss, for Beaumarchais's effortless light touch makes these two plays high points in 18th century European comedy.

▼▲
The sparkling plays about the scoundrelly valet Figaro, used as the basis of operas by Mozart and Roissini

A highly engaging comedy of intrigue, The Barber of Seville portrays the resourceful Figaro foiling a jealous old man's attempts to keep his beautiful ward from her lover. And The Marriage of Figaro—condemned by Louis XVI for its daring satire of nobility and privilege—depicts a master and servant set in opposition by their desire for the same woman. With characteristic lightness of touch, Beaumarchais—a French courtier, secret agent, libertine, and adventurer—created an audacious farce of disguise and mistaken identity that balances wit, frivolity and seriousness in equal measure.

▼▲
Pierre-Augustin Caron de Beaumarchais was born in Paris in 1732. The son of a clockmaker, he was early appointed horologist to the French court. A rich marriage established his fortunes and thereafter he pursued an adventurous career as financial speculator, confidential agent, gun-runner and, ultimately, man of letters. His literary career began inauspiciously with Eug&eacute;nie (1767), an unsuccessful bourgeois drama in the manner of Diderot, but his numerous lawsuits soon gave him the ammunition for a very successful series of M&eacute;moires, in which he attacked his adversaries, establishing his reputation. His most famous works today, however, are the comedies The Barber of Seville and The Marriage of Figaro, which formed the basis of the operas by Rossini and Mozart. Beaumarchais died in 1799.

John Wood was born in 1900 and went to Manchester University. After some years in teaching and adult education he spent his working life in educational administration. Concern with the relevance of the arts in education, combined with personal predilection, led to involvement with the theatre and with the work of Moli&egrave;re in particular, as producer and translator. He also translated The Misanthrope and Other Plays and The Miser and Other Plays for Penguin Classics.

▼▲
I'm the author/artist and I want to review The Barber of Seville and the Marriage of Figaro.
Back
Back