Skip to main content
Would You Baptize an Extraterrestrial?: . . . and Other Strange Questions from the Inbox at the Vatican Observatory - eBook
By: Guy Consolmagno, Paul Mueller
Stock No: WW64567EB 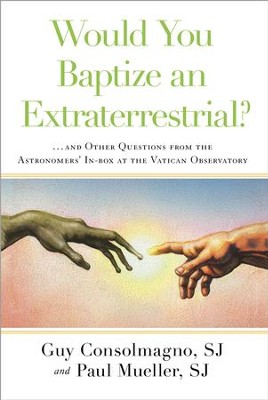 Would You Baptize an Extraterrestrial?: . . . and Other Strange Questions from the Inbox at the Vatican Observatory - eBook

Witty and thought provoking, two Vatican astronomers shed provocative light on some of the strange places where religion and science meet.

"Imagine if a Martian showed up, all big ears and big nose like a child’s drawing, and he asked to be baptized. How would you react?" —Pope Francis, May, 2014

Pope Francis posed that question—without insisting on an answer!—to provoke deeper reflection about inclusiveness and diversity in the Church. But it's not the first time that question has been asked.

Brother Guy Consolmagno and Father Paul Mueller hear questions like that all the time. They’re scientists at the Vatican Observatory, the official astronomical research institute of the Catholic Church. In Would You Baptize an Extraterrestrial? they explore a variety of questions at the crossroads of faith and reason: How do you reconcile the The Big Bang with Genesis? Was the Star of Bethlehem just a pious religious story or an actual description of astronomical events? What really went down between Galileo and the Catholic Church—and why do the effects of that confrontation still reverberate to this day? Will the Universe come to an end? And&hellip; could you really baptize an extraterrestrial?

With disarming humor, Brother Guy and Father Paul explore these questions and more over the course of six days of dialogue. Would You Baptize an Extraterrestrial will make you laugh, make you think, and make you reflect more deeply on science, faith, and the nature of the universe.

▼▲
BROTHER GUY CONSOLMAGNO, SJ was born in Detroit, Michigan, earned undergraduate and masters' degrees in Earth and Planetary Sciences from MIT (in 1974 and 1975), and a Ph. D. in Planetary Science from the University of Arizona in 1978. He worked as a post-doctoral fellow and lecturer at Harvard University's Department of Astronomy, and MIT's Department of Earth and Planetary Sciences; served in the US Peace Corps, teaching physics at the University of Nairobi; and was a physics professor at Lafayette College in Pennsylvania, before entering the Jesuits as a brother in 1989. At the Vatican Observatory since 1993, his research explores connections between meteorites, asteroids, and the evolution of small solar system bodies.

FATHER PAUL R. MUELLER, SJ is a native of Cincinnati, Ohio. He attended a Jesuit high school and earned a degree in physics at Boston University before entering the Society of Jesus in 1982. As part of his Jesuit training, he earned masters degrees in both philosophy and theology, along the way developing an interest in religion-science issues. After being ordained a priest in 1993, he attended the University of Chicago, where he completed a third masters degree (in physics) and a doctorate in the history and philosophy of science through the interdisciplinary program in Conceptual Historical Studies of Science.

▼▲
"Who knew that the Vatican owned an observatory run by Jesuit scientists? Consolmagno, an astronomer who studied at MIT, and Mueller, with a doctorate in the history and philosophy of science from the University of Chicago, are brilliant scientists and theologians, and they both possess a slightly irreverent and refreshing sense of humor. The authors attempt to highlight how the perceived conflict between religion and science is severely overblown. To do this they employ a dialogue format, which works for a while but ultimately becomes tired. The content, however, is absolutely enlightening. Some of the topics the authors tackle include the Galileo controversy, an explanation for the star of Bethlehem, and the discrepancies between the book of Genesis and the big bang theory. Heady stuff for sure, but the casual writing style makes for an enjoyable learning experience. An excellent primer for anyone remotely interest in building a bridge between religious faith and scientific investigation." —Publishers Weekly


"I can’t think of two people better suited to address some essential questions about science that Christians get asked (and ask themselves) on a regular basis. How can you reconcile the Big Bang theory with the belief in God as the Creator of the universe? Is the Catholic Church really against science? Can a scientific person be a believer? Can a believer look to science for answers that religion cannot provide? And what really happened with Galileo? These two talented Jesuit scientists answer these and many more of the most persistent questions about science and religion, in this fascinating, inviting, and frankly necessary new book." —James Martin, SJ, author of The Jesuit Guide to (Almost) Everything

▼▲
I'm the author/artist and I want to review Would You Baptize an Extraterrestrial?: . . . and Other Strange Questions from the Inbox at the Vatican Observatory - eBook.
Back
Back