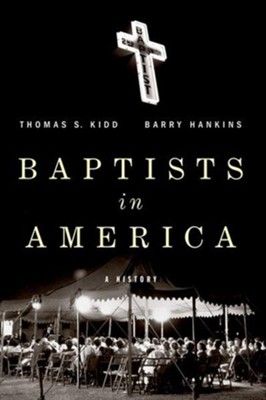 Baptists in America: A History

▼▲
"A nuanced and balanced introduction to many of the decisive moments in the history of this vast and diverse tradition. Weaving together memorable anecdotes, examples, and observations of what 'Baptist' has meant, this promises to be an enjoyable and trustworthy read for novice and expert alike,"---Fides et Historia. 352 pages, softcover.

▼▲
The Puritans called Baptists "the troublers of churches in all places" and hounded them out of Massachusetts Bay Colony. Four hundred years later, Baptists are the second-largest religious group in America, and their influence matches their numbers. They have built strong institutions, from
megachurches to publishing houses to charities to mission organizations, and have firmly established themselves in the mainstream of American culture. Yet the historical legacy of outsider status lingers, and the inherently fractured nature of their faith makes Baptists ever wary of threats from
within as well as without.

In Baptists in America, Thomas S. Kidd and Barry Hankins explore the long-running tensions between church, state, and culture that Baptists have shaped and navigated. Despite the moment of unity that their early persecution provided, their history has been marked by internal battles and schisms that
were microcosms of national events, from the conflict over slavery that divided North from South to the conservative revolution of the 1970s and 80s. Baptists have made an indelible impact on American religious and cultural history, from their early insistence that America should have no established
church to their place in the modern-day culture wars, where they frequently advocate greater religious involvement in politics. Yet the more mainstream they have become, the more they have been pressured to conform to the mainstream, a paradox that defines--and is essential to understanding--the
Baptist experience in America.

Kidd and Hankins, both practicing Baptists, weave the threads of Baptist history alongside those of American history. Baptists in America is a remarkable story of how one religious denomination was transformed from persecuted minority into a leading actor on the national stage, with profound
implications for American society and culture.

▼▲
Thomas S. Kidd is Distinguished Professor of History at Baylor University and Associate Director of Baylor's Institute for Studies of Religion. His most recent book is Benjamin Franklin: The Religious Life of a Founding Father.

Barry Hankins is Professor of History and Chair of the Department of History at Baylor University. He is the author of numerous books, most recently Woodrow Wilson: Ruling Elder, Spiritual President.

▼▲
"In this engaging survey, the authors focus on a number of major themes: struggles for religious liberty, revivalism, race and slavery, liberal-fundamentalist disputes, the civil rights movement, and the religious Right...overall this is a very good book."--CHOICE
"The final section on Baptist identity was both thought-provoking and perceptive. This is an excellent introduction to Baptists in America." -- Brian Talbot, Baptist Quarterly
"Thomas Kidd and Barry Hankins are two of the most respectable church historians in the academy today. Their work is always incisive and illuminating--as in reading this book you will soon discover." --R. Albert Mohler, Jr., President of the Southern Baptist Theological Seminary
"'Baptists,' the authors say, 'are notorious for two things--evangelism and schism.' Baptist successes as evangelists since the colonial era are the basis for their immense influence in American life. Their proneness to schism makes for good stories and is a reason why we need a clear and engaging
account such as this. Baptists in America is both readable and fascinating." --George M. Marsden, author of Jonathan Edwards: A Life
"In clear and compelling prose, filled with enlightening anecdotes, this book tells the amazing story of how a persecuted minority of Christians, who rejected infant baptism and state control of the church, grew into the largest denomination in the United States with culture-shaping consequences.
An important contribution to American Religious History, this book should be widely read by anyone interested in the history and present state of religion in U.S. culture and politics." --Albert J. Raboteau, Henry W. Putnam Professor of Religion, Princeton University
"Some books on Baptists in America sprinkle the reader with superficial simplicity, focusing on only one tribe or one aspect of the Baptist experience. Others drown the reader in historical narrative, but with no clear connection as to why non-Baptists ought to care. This book is different. This
history offers a full immersion in the Baptist story, in every stream and fork of the Baptist river. This volume connects the Baptist experience to larger trends in American culture, politics, and theology in a way that informs both insiders and outsiders. This book is, without doubt, the definitive
work on Baptists in America for this generation." --Russell D. Moore, President, Southern Baptist Ethics & Religious Liberty Commission

"A thoroughgoing study of Baptists, radicalized by persecution and honed by internal schism. ... The authors usefully trace the Baptists' shift from outsiders to consummate insiders, all the way to the White House. An instructive work that allows for a fuller understanding of an important religious
element in America." --Kirkus Reviews
"This fascinating piece of cultural history dynamically examines religious tensions between church, state, and evolving U.S. cultural norms." --Library Journal
"Baptists have been one of the most influential groups of any kind in American history... This book covers that remarkable past with a nice mix of readability and reliability... Highly recommended..." --Booklist
"...Thomas Kidd and Barry Hankins, both history professors at Baylor University, a Baptist institution in Texas, wrestle capably with the oddly difficult question of what defines Baptists." --The Economist

"Kidd and Hankins know their stuff... the two have crafted an engaging read." --Arkansas Democrat-Gazette
"There are few historians I have more respect for than Tommy Kidd and Barry Hankins... In their capable hands, Baptist history will be both lively and engaging." --The Gospel Coalition
"With such awareness of the personal and political dimensions of writing history, especially to be read by other Baptists, they offer an insightful short history of the Baptist movement."-- Rev. Jerrod Hugenot, Journal of the Academy of Parish Clergy

"Kidd and Hankins have produced a helpful and well-written study that offers non-Baptists a sense of who Baptists were and are, while helping to ground Baptists themselves in a sense of identity that might well prepare them for the next inevitable controversy." --Christian Century
"Kidd and Hankins have provided Baptists and non-Baptists with a nuanced and generally balanced introduction to many of the decisive moments in the history of this vast and diverse Baptist tradition. Weaving together memorable anecdotes, examples, and observations about what 'Baptist' has meant,
Baptists in America promises to be an enjoyable and trustworthy read for novice and expert alike."--Fides et Historia

▼▲
I'm the author/artist and I want to review Baptists in America: A History.
Back