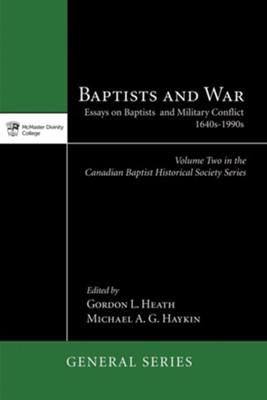 ▼▲
While Baptists through the years have been certain that "war is hell," they have not always been able to agree on how to respond to it. This book traces much of this troubled relationship from the days of Baptist origins with close ties to pacifist Anabaptists to the responses of Baptists in America to the war in Vietnam. Essays also include discussions of the English Baptist Andrew Fuller's response to the threat of Napoleon, how Baptists in America dealt with the War of 1812, the support of Canadian Baptists for Britain's war in Sudan and Abyssinia in the 1880s, the decisive effect of the First World War on Canada's T. T. Shields, the response of Australian Baptists to the Second World War, and how Russian Baptists dealt with the Cold War. These chapters provide important analyses of Baptist reactions to one of society's most intractable problems.

▼▲
Gordon L. Heath is Associate Professor of Christian History at McMaster Divinity College, Hamilton, Ontario and Centenary Chair in World Christianity. He is the author of A War with a Silver Lining: Canadian Protestant Churches and the South African War, 1899-1902 (2009). Michael A. G. Haykin is Professor of Church History at the Southern Baptist Theological Seminary, Louisville, KY. He is the author of a number of books dealing with patristic and Baptist studies.

▼▲
I'm the author/artist and I want to review Baptists and War: Essays on Baptists and Military Conflict, 1640s-1990s - eBook.
Back
Back