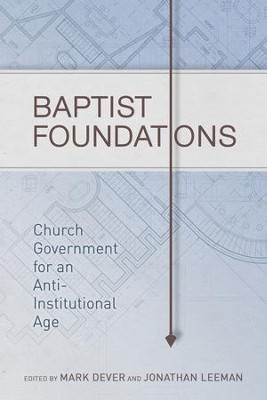 ▼▲
Ours is an anti-polity age, perhaps more than any other time in the history of the church. Yet polity remains as important now as it was in the New Testament.

What then is a right or biblical polity? The contributors to this volume make an exegetical and theological case for a Baptist polity. Right polity, they argue, is congregationalism, elder leadership, diaconal service, regenerate church membership, church discipline, and a Baptist approach to the ordinances.

Each section explores the pastoral applications of these arguments. How do congregationalism and elder leadership work together? When should a church practice church discipline? How can one church work with another in matters of membership and discipline?

To be read sequentially or used as a reference guide, Baptist Foundations provides a contemporary treatment of Baptist church government and structures, the first of its kind in decades.

▼▲
Mark Dever is senior pastor of Capitol Hill Baptist Church in Washington, DC and president of 9Marks. He holds degrees from Duke University (B.A.), Gordon-Conwell Theological Seminary (M.Div.), The Southern Baptist Theological Seminary (M.Theol.), and Cambridge University (PH.D.).
Jonathan Leeman (Ph.D., Wales) is an elder at Capitol Hill Baptist Church in Washington, DC and the editorial director for 9Marks. He edits the 9Marks series of books as well as the 9Marks Journal. He is also the author of several books on the church, including The Church and the Surprising Offense of God's Love. Jonathan lives with his wife and four daughters in suburban Washington.
Shawn Wright is assistant professor of Church History at Southern Baptist Theological Seminary in Louisville, Kentucky, and also serves as one of the pastors at Clifton Baptist Church. Wright and his wife have five sons.

Michael A. G. Haykin is professor of Church History and Biblical Spirituality at Southern Baptist Theological Seminary in Louisville, Kentucky.

Thomas R. Schreiner is the James Harrison Professor of New Testament Interpretation at The Southern Baptist Theological Seminary in Louisville, Kentucky. He has also taught New Testament at Azusa Pacific University and Bethel Theological Seminary. He received a B.S. from Western Oregon University, a M.Div. and Th.M. from Western Conservative Baptist Seminary, and a Ph.D. in New Testament from Fuller Theological Seminary. He has published a number of articles and book reviews in scholarly journals. His published books include: Interpreting the Pauline Epistles, The Law and Its Fulfillment: A Pauline Theology of Law; Romans; Women in the Church: A Fresh Analysis of 1 Timothy 2:9-15, co-edited with H. S. Baldwin and A. Kostenberger; Still Sovereign: Contemporary Perspectives on Election, Foreknowledge, and Grace, co-edited with B. A. Ware; The Race Set Before Us: A Biblical Theology of Perseverance and Assurance, co-authored with Ardel Caneday, Paul, Apostle of God's Glory in Christ: A Pauline Theology; New Testament Theology: Magnifying God in Christ. He is also the preaching pastor of Clifton Baptist Church in Louisville, Kentucky. He is married to Diane Elaine and they have four children: Daniel, Patrick, John, and Anna.

▼▲
I'm the author/artist and I want to review Baptist Foundations: Church Government for an Anti-Institutional Age - eBook.
Back
Back