We are OPEN and SHIPPING - click here for shipping estimates
Baptisms
By: Jorn Overby 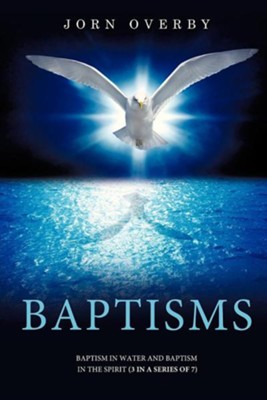 ▼▲
"Baptisms" is equivalent to chapter 3 of seven chapters in the book "A Child of God," designed to give the new believer in Christ an understanding of what salvation is and what our inheritance and position in Christ includes. This booklet will lead you through the meaning and importance of water baptism as an act of establishing your covenant with Christ and becoming part of His "death and resurrection." Then it deals with the aim and nature of the baptism in the Holy Spirit as an endowment of power to be an effective witness for Christ. It also includes a chapter about the importance of speaking in tongues, both with regard to your personal daily prayer life as well releasing the revelation gifts of the Holy Spirit in your life and ministry. Jorn Overby is born of Norwegian (Lutheran) missionaries to Bangladesh and spent his childhood on the Indian subcontinent. He received his MD in Divinity at The Free Faculty of Theology in Oslo, Norway in 1981. After studies in English at the University of Oslo he entered into his calling of church building and international missions work in 1983. Having pioneered and pastored a church in Oslo (including a government approved kindergarten and public Christian school as well as an international Bible school) for some 22 years, he has since 2005 concentrated his work solely on the international missions field. He is the director of the missions organization Missions Thrust International, founded in 1990, and has over the last 20 years conducted interdenominational pastors' and leadership seminars as well as evangelistic campaigns in almost 50 nations around the world, predominantly in Asia and Africa. Jorn Overby resides with his wife Borghild in Oslo, Norway. They have two children.

▼▲
I'm the author/artist and I want to review Baptisms.
Back
×