Skip to main content
Get Christmas Ready Sale: Deals on over 1,150 titles thru 9/27.
Baptism: Its Purpose, Practice and Power
By: Michael Green
Stock No: WW218784 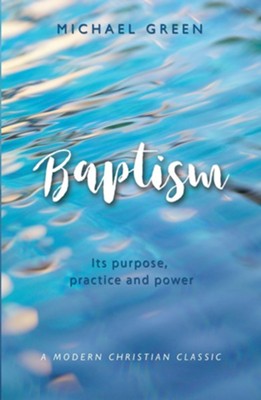 Baptism: Its Purpose, Practice and Power

▼▲
Baptism: The confusion never seems to go away. Some Christians stress baptism as a gateway into the church. Others see it primarily as an individual's testimony to faith and repentance. Still others concentrate on baptism in the spirit. Michael Green attempts to steer a straight, biblical course through the troubled waters of baptism. In seeking common ground among various Christian traditions, he looks first at what Scripture has to say and then assesses the strengths and weaknesses of differing views in that light. While insisting that baptism is not substitute for saving faith, he nevertheless makes a strong case for the practice of infant baptism, confronting head-on common objections to the practice as well as addressing the related problems of confirmation and rebaptism.

▼▲
Michael Green (born 1930) was a British theologian, Anglican priest, Christian apologist and author of more than 50 books. He was Principal of St John's College, Nottingham (1969-75) and Rector of St Aldate's Church, Oxford and chaplain of the Oxford Pastorate (1975-86). He had additionally been an honorary canon of Coventry Cathedral from 1970 to 1978. He then moved to Canada where he was Professor of Evangelism at Regent College, Vancouver from 1987 to 1992. He returned to England to take up the position of advisor to the Archbishop of Canterbury and the Archbishop of York for the Springboard Decade of Evangelism. In 1993 he was appointed the Six Preacher of Canterbury Cathedral. Despite having officially retired in 1996, he became a Senior Research Fellow and Head of Evangelism and Apologetics at Wycliffe Hall, Oxford in 1997 and lived in the town of Abingdon near Oxford.

▼▲
I'm the author/artist and I want to review Baptism: Its Purpose, Practice and Power.
Back