Skip to main content
A Holy Baptism of Fire and Blood: The Bible and the American Civil War
By: James P. Byrd
Stock No: WW902791 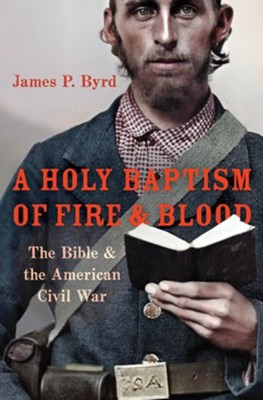 A Holy Baptism of Fire and Blood: The Bible and the American Civil War

▼▲
"Given the depth of religious fervor and the level of biblical literacy that marked American society during the war years, Byrd is able to tap into a deep well of cultural riches and historical insights. Civil War buffs and Scripture enthusiasts alike will find this to be a uniquely worthwhile reading experience,"---Kirkus Reviews. 392 pages, hardcover.

▼▲
In his Second Inaugural Address, delivered as the nation was in the throes of the Civil War, Abraham Lincoln proclaimed that both sides "read the same Bible and pray to the same God, and each invokes His aid against the other." He wasn't speaking metaphorically: the Bible was frequently
wielded as a weapon in support of both North and South.

As James P. Byrd reveals in this insightful narrative, no book was more important to the Civil War than the Bible. From Massachusetts to Mississippi and beyond, the Bible was the nation's most read and respected book. It presented a drama of salvation and damnation, of providence and judgment, of
sacred history and sacrifice. When Americans argued over the issues that divided them -- slavery, secession, patriotism, authority, white supremacy, and violence -- the Bible was the book they most often invoked. Soldiers fought the Civil War with Bibles in hand, and both sides called the war just
and sacred. In scripture, both Union and Confederate soldiers found inspiration for dying-and for killing-on a scale never before seen in the nation's history. With approximately 750,000 fatalities, the Civil War was the deadliest of the nation's wars, leading many to turn to the Bible not just to
fight but to deal with its inevitable trauma.

A fascinating overview of religious and military conflict, A Holy Baptism of Fire and Blood draws on an astonishing array of sources to demonstrate the many ways that Americans enlisted the Bible in the nation's bloodiest, and arguably most biblically-saturated conflict.

▼▲
"[Starred Review] This study of the use of the Bible at a critical time in the history of the United States can shed light on our own times, when the Bible is often used in a political tug-of-war." -- Augustine J. Curley, Library Journal
"[Starred Review] Civil War buffs and Scripture enthusiasts alike will find this book to be a uniquely worthwhile reading experience." -- Kirkus
"For readers accustomed to encountering the Civil War through battlefield accounts and secular biographies, Mr. Byrd's book is revelatory. No recent historian has shed more clarifying light on the spiritual equipment that bolstered soldiers' hearts and shaped their moral determination. Illuminating
the faith they carried into battle along with their Bibles, as Mr. Byrd so eloquently does, helps us understand the inexplicable: how ordinary men by the tens and hundreds of thousands faced the imminent prospect of violent death or horrible maiming at Shiloh, Antietam, Cold Harbor and a thousand
other battlefields that made the war the bloodiest in the nation's history." -- Fergus Bordewich, Wall Street Journal
"War is everywhere in the New Testament, as in the Old,' declared a Southern clergyman in 1863. The Bible was the most frequently cited book in both North and South during the Civil War. It served as a guide to explain the sacrifices and sufferings of soldiers and civilians. James Byrd's magisterial
study helps the modern reader appreciate the all-encompassing role of scripture in America's most deadly experience." -- James M. McPherson, author of Battle Cry of Freedom: The Civil War Era
"This remarkable examination of the use of the Bible in the Civil War, North and South, represents a new departure in Civil War historiography. Through an innovative and exhaustive quantitative compilation and analysis of scriptural references, James Byrd highlights the most important Scriptures
cited during the war and sets them in their broadest historical context. While the texts and interpretations varied widely in North and South, Byrd demonstrates in striking detail the truth of Lincoln's provocative assertion in his 2nd Inaugural that both sides "read the same bible and pray to the
same God." -- Harry S. Stout, Yale University

▼▲
I'm the author/artist and I want to review A Holy Baptism of Fire and Blood: The Bible and the American Civil War.
Back
Back