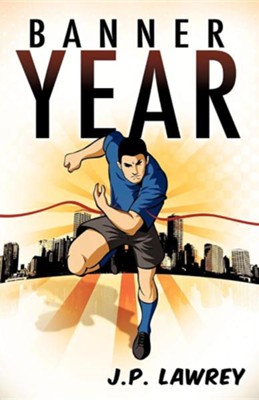 ▼▲
To Mom and Dad, Kate and AllysonWhose names are written in a far better book...And to James Timp, thank you."Jack Johnson ran with ghosts," and so begins this adventure through the heart of a son who truly desires to please his father. Learning that his father's days are numbered, high school cross country coach Jack Johnson decides to make this cross country season a "banner year." Inviting his dad to become his assistant coach, he embarks on a journey to the State Meet that he hopes will fulfill his father's lifelong dream of a State Championship. Along the way Jack finds love and with his father melds together an unforgettable group of characters into a team, a team whose prospects look unstoppable until all seems threatened by human frailty. What Jack does with his dream before the Lord defines the rest of the story until the riveting conclusion of the "Banner Year."John Paul Lawrey is a Minnesota native and no stranger to cross country, having been an athlete in cross country and track while at Bethel College. More recently, through God's amazing kindness, he graduated from Bethel Seminary in St. Paul. Among other things in his working life, Mr. Lawrey has learned how to make a latte, perform country music standards, sell deer licenses, and wait tables. He wishes to thank Daniel Chelstrom for the many ways in which he has served as an inspiration to this story. September usually finds him grouse hunting near Grand Marais, MN.

▼▲
I'm the author/artist and I want to review Banner Year.
Back