Skip to main content
Bankruptcy of Our Nation (Revised and Expanded): Your Financial Survival Guide - eBook
By: Jerry Robinson
Stock No: WW32120EB 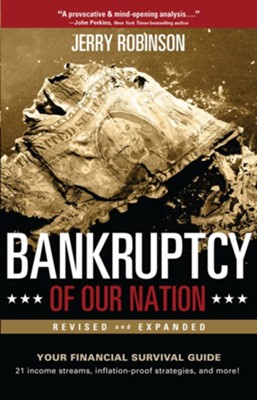 Bankruptcy of Our Nation (Revised and Expanded): Your Financial Survival Guide - eBook

"It's no secret that the U.S. national debt is in the tens of trillions. But did you know that America also has future unfunded obligations of over $118 trillion? Unfortunately, America's politicians have no plan to solve our mounting fiscal and monetary crisis.

But you don't have to watch this unfold in fear of your financial future.

The time for debate is over... It's time to prepare!

In this revised and expanded release of Bankruptcy of Our Nation, Jerry Robinson offers you the ultimate financial survival guide. Robinson, an Austrian economist, columnist, and radio host, is featured weekly on Worldnetdaily.com, quoted by USA Today, has appeared on Fox News, and has written columns for Townhall and FinancialSense. Allow him to guide you with details of the

You can survive this economic crisis, but you can't wait. It’s time to take action. Let this book show you how to become a better investor and create multiple streams of income."

Recently, Robinson has been quoted by USA Today and other news agencies on the topic of the economy, and his columns have appeared regularly in numerous print and web publications, including WorldNetDaily, Townhall, and FinancialSense.

Robinson has spoken on the topics of money and economics around the globe, including the United States, Israel, Turkey, and Greece. He holds a Bachelor's degree in Economics and has taught a course in macroeconomics at the college level. In addition, Robinson is also the Editor-in-Chief of the popular economic newsletter, Follow the Money Quarterly.

▼▲
I'm the author/artist and I want to review Bankruptcy of Our Nation (Revised and Expanded): Your Financial Survival Guide - eBook.
Back
Back