We are OPEN and SHIPPING - click here for shipping estimates
PRE-SUMMER CYBER SALE EXTENDED thru 6/1 ~ Over 2,500 items up to 90% off
Banker to the Poor: Micro-Lending and the Battle Against World Poverty
By: Muhammad Yunus 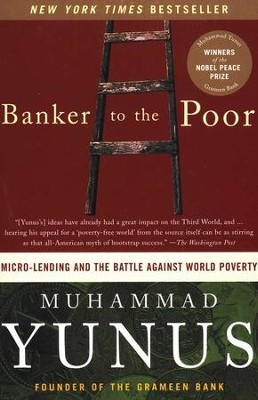 Banker to the Poor: Micro-Lending and the Battle Against World Poverty

▼▲
Winner of the 2006 Nobel Peace Prize! "Yunus's ideas have already had a great impact on the Third World, and hearing his appeal for a 'poverty-free world' from the source itself can be as stirring as that all-American myth of bootstrap success,"---Washington Post. Over 250 institutions worldwide now offer micro-credit. 273 pages, softcover.

▼▲
The inspirational story of how Nobel Prize winner Muhammad Yunus invented microcredit, founded the Grameen Bank, and transformed the fortunes of millions of poor people around the world.
Muhammad Yunus was a professor of economics in Bangladesh, who realized that the most impoverished members of his community were systematically neglected by the banking system -- no one would loan them any money. Yunus conceived of a new form of banking -- microcredit -- that would offer very small loans to the poorest people without collateral, and teach them how to manage and use their loans to create successful small businesses. He founded Grameen Bank based on the belief that credit is a basic human right, not the privilege of a fortunate few, and it now provides $24 billion of micro-loans to more than nine million families. Ninety-seven percent of its clients are women, and repayment rates are over 90 percent. Outside of Bangladesh, micro-lending programs inspired by Grameen have blossomed, and serve hundreds of millions of people around the world.
The definitive history of micro-credit direct from the man that conceived of it, Banker to the Poor is the moving story of someone who dreamed of changing the world -- and did.

▼▲
Muhammad Yunus was born in Bangladesh and earned his Ph.D. in economics in the United States at Vanderbilt University, where he was deeply influenced by the civil rights movement. He is the author of Creating a World Without Poverty, Building Social Business, and A World of Three Zeros. The recipient of the Nobel Peace Prize, the Congressional Gold Medal, and the Presidential Medal of Freedom, he still lives in Bangladesh, and travels widely around the world on behalf of Grameen and the concept of micro-credit.

▼▲
"By giving poor people the power to help themselves, Dr. Yunus has offered them something far more valuable than a plate of food - security in its most fundamental form."—President Jimmy Carter
"[Yunus's] ideas have already had a great impact on the Third World, and ... hearing his appeal for a 'poverty-free world' from the source itself can be as stirring as that all-American myth of bootstrap success."—Washington Post
"I only wish every nation shared Dr. Yunus's and the Grameen Bank's appreciation of the vital role that women play in the economic, social, and political life of our societies."—Hillary Clinton
"Muhammad Yunus is a practical visionary who has improved the lives of millions of people in his native Bangladesh and elsewhere in the world. Banker to the Poor [is] well-reasoned yet passionate."—Los Angeles Times
"A fascinating and compelling account by someone who decided to make a difference, and did."—CHOICE

▼▲
I'm the author/artist and I want to review Banker to the Poor: Micro-Lending and the Battle Against World Poverty.
Back
×
Back
×