Skip to main content
The Banister Falls Collection: The Dandelion Field and The Hearts We Mend / Digital original - eBook
By: Kathryn Springer
Stock No: WW82523EB 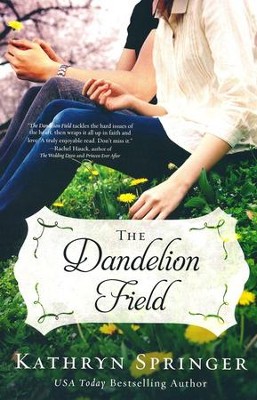 The Banister Falls Collection: The Dandelion Field and The Hearts We Mend / Digital original - eBook

▼▲
Nothing has ever come easy for single mom Genevieve Lightly. Over the years, she's managed to pay the bills waitressing, and she is deeply devoted to her daughter, Raine. Gin has been satisfied moving from city to city, never putting down roots or making commitments. But when engine trouble temporarily strands them in the small town of Banister Falls, Wisconsin, Gin promises her daughter they will stay put until Raine graduates from high school in the spring.

Dan Moretti couldn't imagine a life without Evie, but she married his best friend. After Max died while fighting a huge blaze, Dan has looked out for Evie and her son, Cody. Evie has always made it clear she thinks of him only as a friend, but Dan has secretly held out hope that her feelings would change. When a small town scandal erupts, Dan is caught in the middle and his loyalty put to the test when he realizes his feelings are the ones that are changing. He's falling for a beautiful, unconventional waitress named Gin.

As Cody and Raine move closer to making decisions that will affect the rest of their lives, Dan makes a decision, too. But can he convince a woman who doesn't believe in happy endings to take a chance on a new beginning . . . with him?

This handsome firefighter makes a living coming to the rescue, but Gin doesn’t need a man to fight her battles.

After Raine’s dad walked out, Ginevieve Lightly never lived in one place too long, a rambling lifestyle that defined her daughter’s youth. When their car dies in Banister Falls, Wisconsin, Gin promises Raine they can stay until she finishes her senior year of high school. Gin will do anything to make sure her daughter has a bright future . . . a future that’s compromised when Raine reveals she’s pregnant.

Dan Moretti has only ever called Banister Falls home. After losing his best friend in a tragic accident, Dan devoted himself to responding to fires, rescuing the helpless, and guiding Cody Bennett, his best friend’s son, through life. With Cody being the epitome of the good kid, it was an easy job. Until he says four little words: "The baby is mine."

As Gin and Dan do the best they can to guide the two teenagers through their early entry into adulthood, they discover together that romance can bloom in the rockiest of situations. And God can turn the pieces of a broken past into a beautiful new beginning.

The Hearts We Mend

Planning and Post-It notes are the epitome of Evie’s life. But when she meets Jack, her life gets more than a little complicated.

Thirteen years ago, Evie’s firefighter husband was killed in the line of duty, leaving her to raise their young son, Cody, alone. Now, Cody is marrying the love of his life, and as he packs up his belongings, the house feels as empty as Evie’s heart. But for all her planning and mad organizational skills, Evie could never have anticipated the dramatic shift her life is about to make.

Tattooed, rough-around-the-edges Jack raises quite a few eyebrows in the tight-knit community of Banister Falls. Where Evie’s life is stream-lined, Jack’s approach to living is moment-by-moment. But as Evie gets drawn into Jack’s world—a world that isn’t as safe or predictable as the one she’s worked so hard to create—he challenges her to open her eyes to the problems outside the walls of the church.

Jack doesn’t make Evie feel comfortable, but he definitely makes her feel something. Something she hasn’t felt since Max passed away—or, maybe ever. Because even though Jack isn’t anything like her late husband, he just might be everything she needs.

Kathryn Springer is a USA Today bestselling author. She grew up in northern Wisconsin, where her parents published a weekly newspaper. As a child she spent many hours sitting at her mother’s typewriter, plunking out stories, and credits her parents for instilling in her a love of books—which eventually turned into a desire to tell stories of her own. Kathryn has written 19 books with close to two million copies sold. She lives with her husband and three children in Marinette, Wisconsin. Visit her online at kathrynspringer.com Facebook: Kathrynspringerauthor

▼▲
I'm the author/artist and I want to review The Banister Falls Collection: The Dandelion Field and The Hearts We Mend / Digital original - eBook.
Back
Back