Skip to main content
SPRING CYBER EVENT STARTS NOW: And it's a really BIG deal! Up to 88% off through 5/24>
Of Bananas and Hard-Boiled Eggs: An ESL Curriculum on the Journey Toward Biculturalism - eBook
By: Mary Codman-Wilson
Stock No: WW31752EB 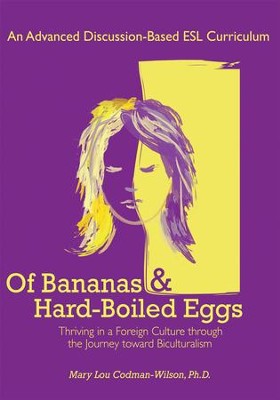 Of Bananas and Hard-Boiled Eggs: An ESL Curriculum on the Journey Toward Biculturalism - eBook

▼▲
America as a nation is arguably the most pluralistic nation of the twenty-first century. It is common to hear many different languages in the schools, shopping centers, airports, or neighborhoods in the United States. ESL classes help people of these different language groups learn how to communicate in English, so it is only natural that an ESL curriculum addresses topics relevant to a person's journey toward biculturalism. The goal of this advanced English conversation curriculum is to help ESL learners mainstream into the dominant culture and develop a comfortable bicultural identity. That way, they can be at home in both their culture of origin and their new foreign culture. The expectation is that through English conversation practice and discussion of topics relevant to them, learners will develop the confidence to move outside the cocoon of their own language group. They can then interact successfully in English in the daily routines of life because they understand English and can be understood by English-speaking people. The content is developed from real-life stores, written by a team including ESL learners about issues they have experienced in learning how to live successfully in the United States. Since the curriculum is discussion-based, it gives the learners the opportunity to discuss their feelings and to support one another in their cultural adjustment.

▼▲
I'm the author/artist and I want to review Of Bananas and Hard-Boiled Eggs: An ESL Curriculum on the Journey Toward Biculturalism - eBook.
Back
Back