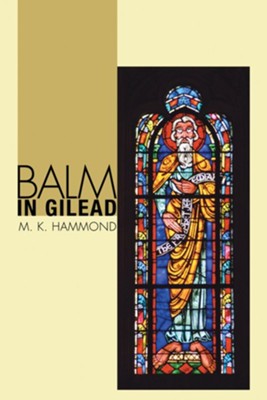 ▼▲
With 'Balm in Gilead', M. K. Hammond guides us through the life and the writings of the prophet Jeremiah recorded in the biblical book that bears his name. Soon after the Babylonians conquer Judah and appoint a new king in Jerusalem, Hammond notes, the prophet begins to keep a diary. Concurrently, he writes letters to his uncle Shallum, who is deported to Babylon with the first group of Hebrew captives. In what Hammond calls ""flashbacks,"" Jeremiah records memories from his early childhood, recalls his first temple sermon (delivered when he was only seventeen years old), and recounts episodes from the turbulent reigns of previous kings. His writings tell of sinful behavior he sees all around him, including idol worship, corruption among princes and priests, adultery, child sacrifice, and cannibalism. Hammond explores the tension between, on the one hand, Jeremiah's powerful sermons illustrated with striking visual signs and displays and, on the other hand, Jeremiah's agony over his call to be a prophet to whom no one listens. Jeremiah agonizes over his call because his enemies (including his own brothers) try to kill him. At times, even the Lord, it seems, has deserted him. Yet, Hammond asserts, the prophet finds hope when a new governor is appointed in Judah, and when his uncle tells him of the exiled Jews' loyalty to their God, even at risk of their lives. Jeremiah expresses hope for a new covenant with God, new leadership by faithful kings and priests, and return of all God's people to Zion. ""Marie Hammond has written a very creative work on the book of Jeremiah. She has attempted to set the material in some sort of chronological order (since the book itself is not arranged in that manner) and has done it with imagination while still being faithful to the original text. It is set in the form of letters written back and forth to one of Jeremiah's kinsmen in exile in Babylon. The book is clearly written and will be useful in Sunday School and other settings as well. She even brings a bit of 'romance' into Jeremiah's life It is well done and thoughtfully prepared."" --Dr. James M. Efird Professor Emeritus of Biblical Interpretation Duke Divinity School ""Words like jeremiad and balm in Gilead have entered into common usage, but the book of Jeremiah itself still presents something of a challenge. It is a relatively long book and written in a confused chronological order with considerable repetition. In meeting this challenge Hammond uses a literary device of a supposed find of several letters and a diary of Jeremiah. This device provides a context that brings Jeremiah to life and helps clarify the core value of his prophecies. Hammond's style of writing makes for interesting reading yet incorporates the major points of the text, often as direct quotations from the biblical book. Whether used as a supplement to the study of the book of Jeremiah or as an introduction, this re-working of the life of Jeremiah will help to direct the modern reader to a deeper understanding of the biblical text."" --Charles R. Young Professor Emeritus Duke University ""While remaining faithful to the biblical and historical material, Ms. Hammond has given us an interesting account of the life and times of Jeremiah. She has succeeded in making a scholarly work not only educational but entertaining as well. As a minister who was involved in teaching, I was grateful when I found resources that helped with presentation of difficult material in story form, made the order of chronological events understandable, and brought some uniqueness to an old familiar story; Balm in Gilead accomplishes this."" --Bess Hunnings Smith Pastor Emerita Mt. Sylvan United Methodist Church Durham, North Carolina ""Balm in Gilead is a fascinating study of one of the most complex and intriguing of biblical characters. Marie Hammond provides a possible context for comprehending Jeremiah's life and prophecy. Her study/novel is a wonderful contribution, especia

▼▲
I'm the author/artist and I want to review Balm in Gilead.
Back