Skip to main content
SPRING CYBER EVENT STARTS NOW: And it's a really BIG deal! Up to 88% off through 5/24>
Balloons Aloft: Flying South Dakota Skies
By: Arley Kenneth Fadness
Stock No: WW976337 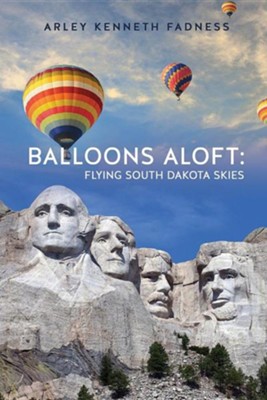 ▼▲
Balloons Aloft: Flying South Dakota Skies: by Arley K. Fadness Balloons Aloft: Flying South Dakota Skies, highlights significant ballooning events and pioneering aeronauts in South Dakota. On the 150th anniversary publication of Jules Verne's classic Cinq Semaines En Balloon (Five Weeks in a Balloon), Balloons Aloft: relives the same imagination, daring risks and courageous adventures that characterized not only Verne's novel, but also, and prophetically -- the history, art and science of ballooning in South Dakota and beyond. Arley Fadness writes as a former employee and friend of Ed Yost, the Father of the Modern Hot Air Balloon. Balloons Aloft: offers the reader a fascinating balloon ride through stories, ancedotes and adventures of celebrated aeronauts. Balloons Aloft chronicles the history of Ballooning in it's many different forms in South Dakota. For a state with a small population, South Dakota has been a major player in ballooning worldwide. This book gives an entertaining and informative perspective on the key characters connected to ballooning in the 20th century. Arley Fadness is in a unique position to give eyewitness views of many of these pioneers in modern ballooning. Norma Kraemer, pilot and author of Images of Aviation South Dakota's First Century of flight. Arley K. Fadness, draftsman, Model A Ford restorer, Pastor and writer was born in Webster, SD. He attended the Boeing drafting school, as well as Luther and McCormick Seminaries. Arley is a retired ELCA Lutheran Pastor having served congregations in Arizona, Minnesota and South Dakota. He is the author of several books including Six Spiritual Needs in America Today; Holy Moses; and Blueprints for Lent. Arley is married to Pamela and the couple have four adult children, Timothy, Susan, Joel, and Rebekah. Arley and Pam love the beautiful Black Hills where they live, hike, bike and dabble in things Scandinavian.

▼▲
I'm the author/artist and I want to review Balloons Aloft: Flying South Dakota Skies.
Back