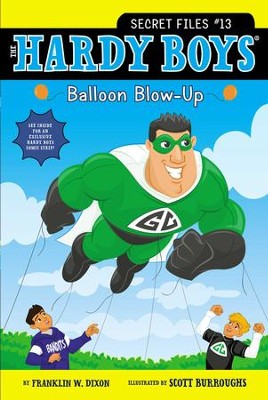 ▼▲
Frank and Joe are on a case that really pops in this Hardy Brothers Secret Files Mystery.

The Green Crawler is one of the coolest superheroes around, and Frank and Joe are some of his biggest fans. And thanks to a contest, the Hardy boys get to be two of the handlers for the new Green Crawler balloon in the annual Fall Festival parade in Bayport!

But the day before the parade, disaster strikes: someone has ripped the Green Crawler balloon! The people in charge think Joe did it—and the Hardys need to clear his name fast. Was it Bayport bully Adam Ackerman, who was green with envy that the Hardys won the contest? Or could the culprits be loyal fans of Nutty the Squirrel, the cartoon character whom the Green Crawler replaced? And Mo Mantis, the Green Crawler’s archenemy, has a few tricks of his own…

Can the brothers figure out who tried to ground the Green Crawler? Or will Joe and Frank be watching the parade from the sidelines this year?

▼▲
Franklin W. Dixon is the author of the ever-popular Hardy Boys books. Scott Burroughs started his career at Disney and has illustrated everything from children’s books to advertisements and editorials. He is also the published author of several children’s books. He lives in Denver, Colorado, with his wife and sons.

▼▲
I'm the author/artist and I want to review Balloon Blow-Up - eBook.
Back
Back