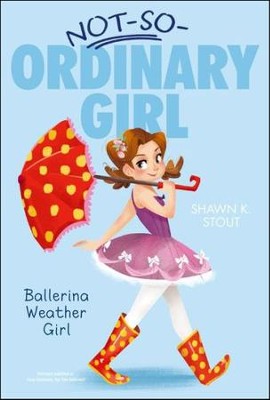 ▼▲
Fiona Finkelstein was born to be a ballerina—if she can get over her stage fright, that is. The first in the feisty and endearing Not-So-Ordinary Girl trilogy.

More than catching fireflies, more than eating triple–hot fudge sundaes, and even more than waking up on the first day of summer vacation, Fiona Finkelstein wants to become a ballerina. There’s just one problem: In her last recital, she starred as the unforgettable Fiona VOMITstein—her “performance” went all over the stage, and all over Benevolence Castles’s cancan costume.

Can Fiona overcome her fears and blossom as a big-time ballerina in The Nutcracker, even in a snowstorm? Or will she be the only person in her family to have the flat-out worst case of stage fright ever?

▼▲
Shawn K. Stout is the author of the Not-So-Ordinary Girl series as well as the middle grade series Penelope Crumb. Stout has an MFA in Writing for Children and Young Adults from Vermont College of Fine Arts. She lives in Maryland with her husband, baby daughter, and two ancient dogs.

▼▲
I'm the author/artist and I want to review Ballerina Weather Girl.
Back