We are OPEN and SHIPPING - click here for shipping estimates
PRE-SUMMER CYBER SALE EXTENDED thru 6/1 ~ Over 2,500 items up to 90% off
Bakhita: From Slave to Saint DVD 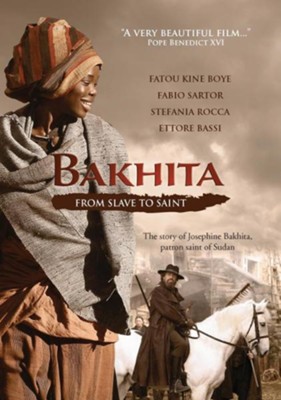 Bakhita: From Slave to Saint DVD

DVD Playable in Bermuda, Canada, United States and U.S. territories. Please check if your equipment can play DVDs coded for this region. Learn more about DVDs and Videos
This product is not available for expedited shipping.
* This product is available for shipment only to the USA.

▼▲
Born in a village in Sudan, kidnapped by slavers, and later sold to Venetian merchant Federico Marin, Bakhita was brought to Italy to become the nanny servant of Federico's daughter, Aurora. Coming closer to God with the help of the kind village priest, Bakhita embraces the Catholic faith and requests to join the order of Canossian sisters, but Marin doesn't want to give her up as his servant. This leads to a moving court case that raised an uproar which impacts Bakhita's freedom and ultimate decision to become a nun. Pope John Paul II declared her a saint in the year 2000. Directed by Giacamo Campiotti ("St. Giuseppe Moscati, Doctor Zhivago") and stars Fatou Kine Boye, Stefania Rocca, Fabio Sartor, Ettore Bassi, and Francesco Salvi. Includes a 16 page collector's booklet by Daria Sockey.

▼▲
I'm the author/artist and I want to review Bakhita: From Slave to Saint DVD.
Back
×