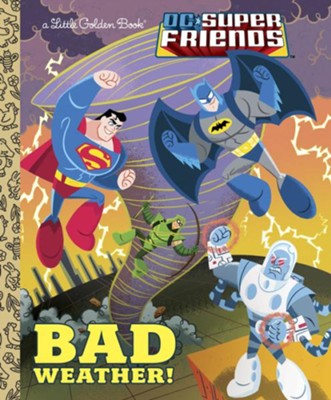 ▼▲
When Mr. Freeze creates a machine that gives him the power to control storms, it’s up to Batman, Superman, and the rest of the Super Friends to put a stop to the weather-wielding foe! Neither snow nor rain nor villain’s might will stop the DC Super Friends from getting the job done! This DC Super Friends Little Golden Book is a must-have for boys ages 2 to 5!

▼▲
Frank Berrios is a former comic book editor at DC Comics and a widely published children’s book author, editor, and illustrator. He's written many Little Golden Books, including Football with Dad and Soccer with Mom, as well as Poppy's Party (DreamWorks Trolls).

Ethen Beavers is an illustrator and comic book artist from Modesto, California. He has illustrated several comic book series and has amassed a cult following for his cutting-edge, action-packed images. He has worked with Warner Bros., the Cartoon Network, and George Lucas. His works include Bad Weather!, Batman!, and The Call of Kur.

▼▲
I'm the author/artist and I want to review Bad Weather! (DC Super Friends).
Back