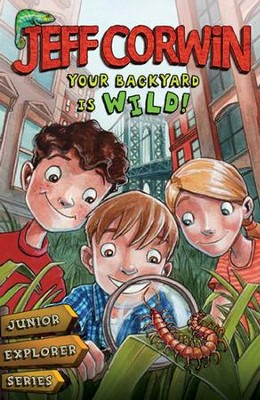 ▼▲
A backyard anywhere is always fun to explore!

When budding naturalists Lucy and Benjamin get a chance to visit their cousin Gabe in Brooklyn, they can't wait. They are used to seeing fascinating animals and plants in the Florida Everglades where they live, but they can't imagine what they will find in Gabe's New York City backyard. The first book in Jeff Corwin's young middle-grade fiction series shows kids that no matter where you live, you can have fun discovering the plants, animals, and natural life around you.

▼▲
Jeff Corwin is the host of a variety of popular television shows, including Animal Planet's Jeff Corwin Experience, Corwin's Quest, Spring Watch, and King of the Jungle; Disney's Going Wild with Jeff Corwin; Investigation Earth with the Discovery Networks; NBC's Jeff Corwin Unleashed, which won an Emmy for an Outstanding Host; and the Travel Channel's Into Alaska and Into the American West. He also co-created and cohosted CNN's Planet in Peril with Anderson Cooper in 2007. In the fall of 2008, Jeff Corwin was named Ambassador of Climate Change for one of the nation's leading conservation organization, Defenders of Wildlife. When not traveling the world, Jeff can be found at his home off the coast of Massachusetts, where he lives with his wife and two daughters.

▼▲
I'm the author/artist and I want to review Your Backyard Is Wild: Junior Explorer Series Book 1 - eBook.
Back
Back