Skip to main content
Back to Schoolin'
By: Kevin Courtright
Stock No: WW790456 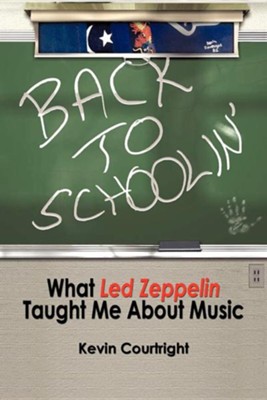 ▼▲
Back to Schoolin' is the culmination of years of conscious and subconscious study in the school of music known as Led Zeppelin. Having studied the band and its music for nearly thirty years, author Kevin Courtright has acquired a tremendous body of knowledge and insight into music and the music business which is modeled by Zeppelin. He presents this knowledge through three major categories: The Music, the Presentation and Relationships, and the Business. Dispersed within these three major categories are a total of thirty-two chapters, each of which is broken into three sections: The Inspiration, the Information, and the Implementation. Mr. Courtright's goal is to pass on this body of knowledge to others, whether musicians or not. The book is fascinating in its presentation, and educational in its content. Back to Schoolin' is recommended reading for anyone interested in not just rock music, but music in general. Kevin Courtright is a Los Angeles-based composer and author whose latest opus is the book Back to Schoolin': What Led Zeppelin Taught Me About Music. With 25 years of composing and study behind him and a long-time devotion to the beauty and intricacies of progressive rock music, Kevin is in a unique position to illustrate the far-reaching and lasting impact of one of the most influential musical groups of the 20th Century. Born outside the District of Columbia, raised near the City by the Bay and transplanted to Los Angeles, Kevin manages to escape his schooling with his creativity intact. His skill as a writer leads to the writing and directing of the hilarious mockumentary "Man On Top." He steps away from the keyboard once a week to teach from the greatest book ever written and on Sundays you will find him lending his bass voice to the Choir of Grace Community Church.

▼▲
I'm the author/artist and I want to review Back to Schoolin'.
Back