Skip to main content
CUSTOMER APPRECIATION SALE: Thousands of starry deals through 6/22!
Back to Life - eBook
By: Kristin Billerbeck
Stock No: WW72193EB 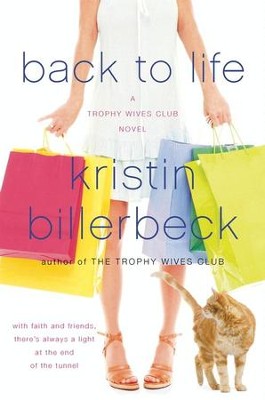 Back to Life - eBook

By: Kristin Billerbeck
More in Trophy Wives Club Series
HarperCollins e-books / 2009 / ePub
2.5 out of 5 stars for Back to Life - eBook (3 Reviews) Write a Review
In Stock
Stock No: WW72193EB

▼▲
Widow of one year Lindsey Brindle must learn to rebuild her life with the help of the Trophy Wives Club and her husband's first wife.Lindsey realized when she married Ron, a man 17 years her senior, that the odds were he'd see heaven before her, but she never expected to be a widow at 35. There's too much of life left for her to just sit around in mourning. But she can't seem to kick start the rest of her life.That is until she gets some help from Ron's first wife, Jane, who shows up unexpectedly at her door one day as the executor of her husband's estate. Jane is everything Lindsey's not: independent, stubborn and a lot older. Plus she has one surprise after another including a son named Ron Jr. (she insists he's not really Ron's son). But an unlikely friendship develops as each woman begins to reevaluate what is really important, and owns up to the mistakes they've made in the past. Told in the alternating voices of Jane and Lindsey, and with the return of many of the witty characters of The Trophy Wives Club, this book is a lighthearted, relatable read for when life goes in a direction you never planned. With faith and friends, there's always light at the end of the tunnel.

Lindsay took to marriage like a starlet to stilettos, but her husband had a deeper love for his business. Left alone after his death, Lindsay must find out who she is when there isn't a party to plan or another person's life to be organized. Can she find her way Back to Life?

Lindsay realized when she married Ron, a man seventeen years her senior, that the odds were he'd see heaven before her, but she never expected to be a widow at thirty-five. She knows there's too much of life remaining for her to just sit around in mourning, but she can't seem to kick-start the rest of her life. Then unexpected help arrives...when Ron's first wife, Jane, shows up at Lindsay's front door.

The executor of their late husband's estate, Jane is everything Lindsay's not: strong, stubborn, independent...and a lot older. There are other surprises as well, including Ron Jr. (whom Jane insists is not "really" Ron's son). But against all odds, a most unlikely friendship begins to develop—as each woman discovers how to own up to her past mistakes and to reevaluate what is really important. Told in the alternating voices of Jane and Lindsay, and featuring the return of many of the unforgettable characters introduced in The Trophy Wives Club, Back to Life is a lighthearted, relatable read about where to turn when life goes in a direction you never planned.

Kristin Billerbeck is a Christy Award finalist and two-time winner of the ACFW Book of the Year.

▼▲
“This enjoyable tale provides subtle spiritual insights and just the right amount of friendship and romance.”

▼▲
I'm the author/artist and I want to review Back to Life - eBook.
Back
Back