Skip to main content
The Way Back: How Christians Blew Our Credibility and How We Get It Back - eBook
By: Phil Cooke, Jonathan Bock
Stock No: WW102568EB 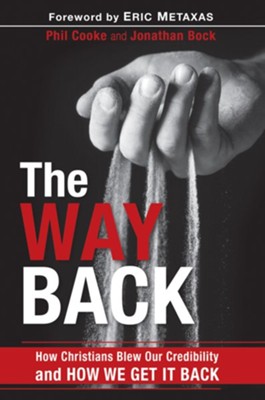 The Way Back: How Christians Blew Our Credibility and How We Get It Back - eBook

▼▲
"This book is both timely and needed. Provocative, yes, because the message is essential at this decisive 'hinge moment' in time." -- Philip Yancey, Author, Vanishing Grace

"The Way Back is the way forward." -- Erwin Raphael McManus, Founder of Mosaic, and Author, The Last Arrow

On a dusty hilltop, Jesus once kickstarted His church with a ragtag group of fishermen who called themselves "The Way." Truth be told, the builders of Christianity were a bunch of nobodies. Like us, they were powerless and flawed and sometimes petty. But they were committed. They were all-in. Within a remarkably short time, The Way became the world's most influential religious faith -- a force in culture, politics, literature, science, philanthropy, and the arts. Against impossible odds, that group of nobodies astonished the world.

Two thousand years later -- by any measure -- Christianity is retreating on all fronts. The Way has lost its way.

In The Way Back, media and marketing experts Phil Cooke and Jonathan Bock take a hard look at Christians today and reveal that we, as a salesforce, have lost our faith in our product. Where's the passion, the excitement, and the commitment that two thousand years ago made such improbable and staggering growth possible?

The Way Back will inspire and equip you to learn from that wonderful group of nobodies, so that you too can astonish the world once more.

▼▲
Phil Cooke is a filmmaker, media consultant, and working Hollywood producer with a Ph.D. in Theology. He's appeared on NBC, MSNBC, CNBC, CNN, Fox News, and his work has been profiled in the New York Times, the Los Angeles Times, and the Wall Street Journal. In addition to writing his blog at philcooke.com, he also blogs for the Huffington Post, and has been a contributor to Fast Company, Forbes.com, Wired.com, and FoxNews.com. Phil has been a long-time member of the Academy of Tevelevision Arts and Sciences. Phil and his wife, Kathy, live in Los Angeles, California.

Jonathan Bock began his career in marketing at Warner Bros. He's the founder of Grace Hill Media, which has marketed more than 400 major motion pictures and television projects to Christian audiences worldwide. He is a member of the Producers Guild of America (PGA) and an elder at Bel Air Prespyterian Church Los Angeles. Jonathan lives in Los Angeles, California.

▼▲
I'm the author/artist and I want to review The Way Back: How Christians Blew Our Credibility and How We Get It Back - eBook.
Back
Back