Skip to main content
SPRING CYBER EVENT STARTS NOW: And it's a really BIG deal! Up to 88% off through 5/24>
Bach: Music in the Castle of Heaven
By: John Eliot Gardiner
Stock No: WW031436 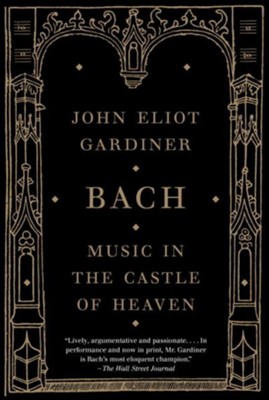 Bach: Music in the Castle of Heaven

▼▲
"Monumental. What Gardiner offers is an intimate knowledge of the choral music and a powerful sense of its cultural context, structural evolution, and doctrinal intent. His portrait reads like a pilgrim's progress, in which a privileged man-of-the-modern-world is transformed by Bach's musical revelation,"---Financial Times. 672 pages, softcover.

Johann Sebastian Bach is one of the most unfathomable composers in the history of music. How can such sublime work have been produced by a man who seems so ordinary, so opaque—and occasionally so intemperate?

John Eliot Gardiner grew up passing one of the only two authentic portraits of Bach every day on the stairs of his parents’ house, where it hung for safety during World War II. He has been studying and performing Bach ever since, and is now regarded as one of the composer’s greatest living interpreters. The fruits of this lifetime’s immersion are distilled in this remarkable book, grounded in the most recent Bach scholarship but moving far beyond it, and explaining in wonderful detail the ideas on which Bach drew, how he worked, how his music is constructed, how it achieves its effects—and what it can tell us about Bach the man.

John Eliot Gardiner is one of the world’s leading conductors, not only of Baroque music but across the whole repertoire. He founded the Monteverdi Choir and Orchestra, the Orchestre de l’Op&eacute;ra de Lyon, the English Baroque Soloists, and the Orchestre R&eacute;volutionnaire et Romantique. He has conducted most of the world’s great orchestras and in many of the leading opera houses. He lives and farms in Dorset, England.

▼▲
"Lively, argumentative and passionate. . . . In performance and now in print, Mr. Gardiner is Bach's most eloquent champion."
—The Wall Street Journal

"Fresh, persuasive. . . . As eloquent a writer as he is a musician, Gardiner brings to his study the invaluable perspective of the practitioner."
—The New York Times Book Review

"So thoughtful, well-researched, and beautifully written that it should satisfy both the well-informed enthusiast and readers simply seeking to become better acquainted with a musical giant. . . . It never happens often enough, but now and then, a subject gets the book it deserves. So it is with John Eliot Gardiner’s Bach."
—The Daily Beast

"A nuanced account. . . . [Gardiner] writes with the care of a scholar, the knowledge of an expert musician, and the passion of a believer."
—The Christian Science Monitor

"It is hard to imagine what the English maestro John Eliot Gardiner . . . might do to surpass Bach in its commitment, scope and comprehensiveness. . . . [He] has done a masterly, monumental job of taking the measure of Bach the man and the musician."
—The New York Times

"It is Gardiner’s experience as a conductor that informs so much of this book. Not only does he explain the harmonic, contrapuntal and polyphonic underpinnings of Bach’s music . . . he also comments on these scores from practical experience, having spent countless hours working out instrumental balances and sonorities, textures and dynamics, in concert halls and churches alike."
—The Washington Post

"Monumental. . . . What Gardiner offers is an intimate knowledge of the choral music . . . and a powerful sense of its cultural context, structural evolution and doctrinal intent. . . . His ’portrait’ reads like a pilgrim’s progress, in which a privileged man-of-the-modern-world is transformed by Bach’s musical revelation."
—Financial Times

"Very rewarding. . . . This book is not a biography in the conventional sense . . . but an attempt to uncover the man through his music. . . . [Gardiner] discovers a wealth of hitherto unseen invention and ingenuity."
—The Economist

"An inspiring book. . . . Superb, timely, thought-provoking, authoritative and extremely useful and readable. . . . It should find its way onto any serious music-lover’s shelves. From there it must often and regularly be taken off and read."
—Classical.Net

"An erudite work resting on prodigious research and experience and deep affection and admiration."
—Kirkus Reviews

"Typical John Eliot to combine so much erudition with even more passion and enthusiasm. It made me want to rush and listen to all the pieces whether familiar or unfamiliar. A treasure chest."
—Simon Rattle, principal conductor of the Berlin Philharmonic

"Bach is a unique portrait of one of the greatest musical geniuses of all time by one of the greatest musical geniuses of our own age. John Eliot Gardiner uses his extraordinary immersion in Bach’s music to illuminate Bach the man more brilliantly than in any previous work, and has created his own deeply moving work of art."
—Amanda Foreman, author of A World on Fire

"A superb achievement, scholarly, lively, controversial and judicious. Like all great biographies of creative artists it builds a bridge from the past to the present and brings the work to new life."
—Ian Bostridge

"A tremendous feat of narrative. . . . [Gardiner] tells this long and richly involved story in a way that makes everything clear, and sets the life and the music in a historical perspective where every detail is relevant and every comment illuminating. Simply as a biography this is splendid, but the fact that it comes with such a wealth of musical understanding and experience makes it invaluable. I learned an enormous amount, and I know I'll return to it again and again."
—Philip Pullman

▼▲
I'm the author/artist and I want to review Bach: Music in the Castle of Heaven.
Back