Babylonia, the Gulf Region, and the Indus: Evidence for Contact in the Third and Early Second Millennia B.C.
By: Steffen Laursen, Piotr Steinkeller 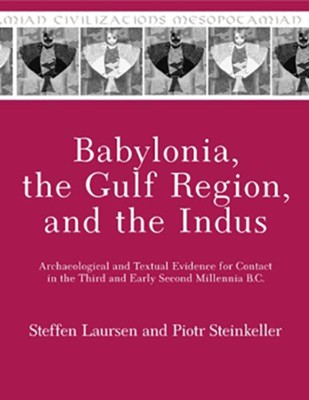 Babylonia, the Gulf Region, and the Indus: Evidence for Contact in the Third and Early Second Millennia B.C.

During the third millennium BC, the huge geographical area stretching between the Mediterranean in the west and the Indus Valley in the east witnessed the rise of a commercial network of unmatched proportions and intensity, within which the Persian Gulf for long periods functioned as a central node. In this book, Laursen and Steinkeller examine the nature of cultural and commercial contacts between Babylonia, the Gulf region, and Indus Civilization. Focusing on the third and early second millennia BC, and using both archaeological data and the evidence of ancient written sources, their study offers an up-to-date synthetic picture of the history of interactions across this vast region. In addition to giving detailed characterizations and evaluations of contacts in various periods, the book also treats a number of important related issues, such as the presence of Amorites in the Gulf (in particular, their role in the rise of the Tilmun center on Bahrain Island); the alleged existence of Meluhhan commercial outposts in Babylonia; and the role that the seaport of Gu’abba played in Babylonia’s interactions with the Gulf region and southeastern Iran.

▼▲
I'm the author/artist and I want to review Babylonia, the Gulf Region, and the Indus: Evidence for Contact in the Third and Early Second Millennia B.C..
Back
×