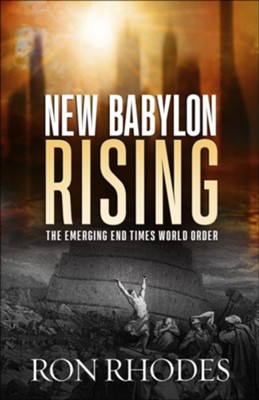 ▼▲
What will the world look like in the last days? More than 10 percent of the Book of Revelation deals with the new Babylon. But are these descriptions meant to be taken literally---or symbolically? Trusted prophecy expert Rhodes offers insight into what Scripture is telling us about the return of this ancient and infamous city. 272 pages, softcover from Harvest.

What New Babylon Reveals to Us About the End Times

What will the world look like in the last days? One significant clue the Bible offers is a fascinating look at New Babylon. More than one-tenth of the book of Revelation is devoted to prophecies about this city—the center of the antichrist’s world government. But are we to understand these prophecies symbolically or literally?

In New Babylon Rising, trusted prophecy expert Ron Rhodes offers insight into what God’s Word tells us about the worldwide influence of New Babylon in the end times. Take a look at what prophetic Scripture says and


As you explore the Bible’s prophecies about the last days, you’ll discover that no matter how uncertain the future looks, you can have peace knowing that God is in full control of all things.

Ron Rhodes (ThD), president of Reasoning from the Scriptures Ministries, is heard regularly on nationwide radio and is the author of The End Times in Chronological Order, The 8 Great Debates of Bible Prophecy, and 40 Days Through Revelation. He periodically teaches at Dallas Theological Seminary and several other seminaries.

Tell us a little about yourself.  I earned both my Th.M. and Th.D. degrees from Dallas Theological Seminary. I've now written over 85 books, many of them dealing with Bible prophecy.

What was your motivation behind this project?  My interest in New Babylon is rooted in the following facts: The Bible mentions Babylon over 280 times. The book of Revelation contains 404 verses, and out of those, 44 deal specifically with Babylon. About 11 percent of the book of Revelation deals with Babylon. While Jerusalem is the most often mentioned city in the Bible, Babylon is the second most often mentioned city. While Jerusalem is portrayed as God’s city in the Bible (Revelation 21:2-3), Babylon is portrayed as a demonic city (18:2). In a way, the Bible could be termed a tale of two cities: Jerusalem and Babylon.

What do you hope folks will gain from this project?  I hope readers will gain an appreciation for the proper interpretation of prophecy in this book. I've always followed this maxim when interpreting Bible prophecy: WHEN THE PLAIN SENSE MAKES GOOD SENSE, SEEK NO OTHER SENSE LEST YOU END UP IN NONSENSE. The fact is that over 100 Old Testament prophecies were literally fulfilled in the first coming of Christ. All of this gives us strong confidence to expect that those prophetic utterances that are not yet fulfilled will also end up being fulfilled just as literally as the earlier prophecies. The fulfillment of past prophecies establishes an unbroken pattern of literal fulfillment. That's why I often tell Christians: If you want to understand how God will fulfill prophecy in the future, just take a look at how He has fulfilled prophecy in the past. The precedent has been set! THAT is why I believe there will be a NEW BABYLON.

How were you personally impacted by working on this project?  Prophecy was what cause me to first become a Christian back in the 1970s.

Anything else you'd like readers / listeners to know:  My prophecy books are engineered to glorify God and Christ. I pray they are highly edifying to the body of Christ.